A ragtag group of rebels are brought together and are forced to overcome their initial mistrust of one another to join forces and save the galaxy from an evil black-helmeted dark lord intent on destroying planets at will. Sound familiar? What if I was to say that one member of the group is a woman; another has a super-being father whose identity is unknown (in the first film in the series at least), while another is a monosyllabic creature who can only be understood by his partner-in-arms. There is sexual chemistry, wisecracks aplenty and spectacular aerial dogfights in deep space as our outnumbered heroes take on the might of the enemy forces. Ring any bells? Yes, of course I am talking about Guardians of the Galaxy, the latest offering from the production behemoth that is Marvel studios. What else could it be? 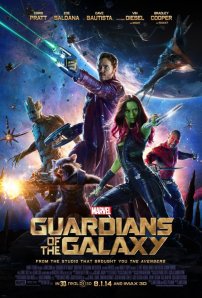 Make no mistake, Guardians of the Galaxy is undeniably indebted to Star Wars, but if you are going to draw inspiration from another source, it might as well be the best. Directed with gusto by James Gunn (Slither, Super), Guardians of the Galaxy is a heck of a lot of fun; full of witty one-liners and pop culture references galore. Chris Pratt is Peter Quill – or Star Lord as he prefers to be known – a loner who trawls the universe in search of bounty that can be sold to the highest bidder. When a mysterious orb comes into his possession, he finds himself in the sights of notorious villain Ronan the Accuser (Lee Pace), who is under instruction from Thanos (Josh Brolin) to retrieve the orb. Quill teams up with Gamora (Zoe Saldana), Rocket Raccoon and a tall tree-like creature known as Groot in an effort to prevent the orb from falling into the wrong hands. The fact that each of them want the orb for themselves results in double-crosses aplenty before they realise they need to work together if they are to survive. Joined by Drax the Destroyer (Dave Bautista), who has his own beef with Ronan and no interest in the orb, the group endure a series of showdowns that push the CGI action into overdrive. 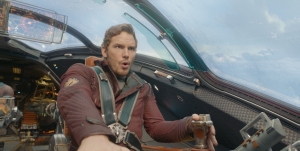 Pratt is great in the lead role, imbuing Quill with the perfect mix of cocky swagger and a vulnerability that lingers from the death of his mother and subsequent abduction into space some 25 years earlier; a Walkman (remember them?) and a mixtape from his mum serving as his security blanket. Both Quill and Rocket (voiced by Bradley Cooper) provide most of the humour through their ongoing efforts at one-upmanship while Saldana, whose sci-fi credentials also include Avatar and two Star Trek films, has seemingly mastered the art of being alien. With only three words to utter as the voice of Groot, Vin Diesel presents what may be his best performance since The Iron Giant. The stellar supporting cast includes the likes of Glenn Close, Benicio Del Toro, Djimon Hounsou, Michael Rooker, Scottish actress Karen Gillan and a subdued John C. Reilly, while Stan Lee makes his obligatory cameo, this time as a lecherous old man.

The Marvel universe has never been entirely lacking in comedy, as seen in Iron Man and The Avengers, but there has been an overall sense of seriousness in these films that is, for the most part, absent in Guardians of the Galaxy. Aside from a maudlin pre-credits prologue that explains Quill’s ascent into outer space in just a couple of minutes, much of the run time is played for laughs. George Lucas’s influence is all over the film, from the cityscapes that very much resemble those of the most recent Star Wars films to the Indiana Jones-style adventures of our heroes. Whilst the film will undoubtedly appeal to a young audience, there are many references – such as an ongoing riff on Footloose – that will only connect with older viewers. Unlike, say, Man of Steel, which took itself far too seriously (Russell Crowe’s unintentionally hilarious death scene notwithstanding), Guardians of the Galaxy has a playfulness about it that makes it a thoroughly enjoyable experience. Whilst his appointment was perhaps viewed with some scepticism, Gunn has ultimately proven himself capable of handling the expectation and scrutiny that is inevitably attached to any Marvel product. There is nothing deep or philosophical to be found here and it is very easy to enjoy the film for what it is; a fun-filled romp through outer space.