Whilst this latest sci-fi actioner from French filmmaker Luc Besson is utterly bonkers, it is also, for the most part, an enjoyable romp. A science-fiction story set in the present day, Lucy is an attempt to combine action sequences with deep philosophical questions about the untapped potential of the human mind. The action elements are fine and certainly nowhere near as overblown as many of the bloated Hollywood hack jobs that are churned out each year. Having directed the likes of the fabulous Leon: The Professional and The Fifth Element, this a return to form of sorts for Besson, whose recent efforts such as The Lady and The Family have not been well received. A prolific writer and producer with more than 100 credits to his name, Besson also wrote the screenplay for Lucy, in which Scarlett Johansson takes on the title role as a young woman whose unwitting involvement in an international drug smuggling operation brings unexpected consequences for all concerned.

Forced to take on an errand for her boyfriend and deliver a suitcase to a mysterious entity, things turn sour very quickly with Lucy to be used as a mule to transport the contents of the suitcase, an experimental new designer drug called CPH4 which, as our protagonist quickly discovers when the bag inside her bursts, unlocks those previously untapped portions of the mind. You see, the science of the film revolves around the notion that humans only use 10% of their brain capacity – a much refuted theory mind you – and as the excessive amounts of this chemical flood her body, Lucy gains access to the previously dormant areas of her brain and develops all manner of physical and psychokinetic powers. Whilst the science may be somewhat dubious, Besson uses the most tried and true method of making something like this more believable; casting Morgan Freeman as the kindly Professor Norman, a scientist whose research Lucy turns to in an effort to understand what is happening to her.

Yes, the plot is pretty silly, but Besson stages all the action well enough that it is far more enjoyable than the likes of Transcendence, which took itself way too seriously. You need to accept the lack of logic and simply enjoy the ride. Of course there are the typical genre clichés, such as the exotic other as the bad guys (Asians on this occasion) and a wild car chase in which our hero somehow emerges unscathed despite driving the wrong direction along a crowded freeway. It is the philosophical musings about evolution, the meaning of time and the true potential of the human species that are the less effective aspect of the narrative, despite Freeman’s best efforts to convince. There is violence aplenty as Lucy evolves into somebody devoid of emotion and unable to feel pain. Some might draw parallels between Lucy and Bradley Cooper’s Eddie Morra in Limitless, although the former transforms in ways that extend way beyond mere intelligence. Unlike Eddie, Lucy never revels in her predicament and when she realises that her death is inevitable, it becomes a race against time to connect with Norman and provide the necessary evidence to render his theories as more than just hypotheses. 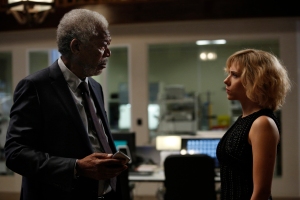 Following Her and Under the Skin, this is another interesting choice of project for Johansson and she is fabulous, effortlessly making the transition from scared patsy to detached super-human and as sexy as hell to boot. Hers is a performance that elevates the film beyond the ludicrousness of the premise into something eminently watchable. Freeman is as reliable as ever in a role that resembles so many he has taken on recently – (Transcendence, Now You See Me, The Dark Knight series), while the multi-cultural supporting cast – which includes Min-sik Choi (Oldboy), former model Analeigh Tipton (Warm Bodies) and Egyptian actor Amr Waked (Syriana) – are lumbered with somewhat one-dimensional characters.

Also serving as editor, Besson uses title cards to keep us updated with the amount of brain capacity Lucy is using and he also intercuts many scenes with footage that serves as a metaphor of sorts; a mouse approaching a trap and leopards stalking gazelles as inferences to the dangers Lucy is facing. Besson is no mug and he has been able to construct a film that at least aims for intelligence while still likely to strike a chord with mainstream audiences. Yes, the ending is a mess but, at a very succinct 89 minutes, Lucy never overstays its welcome and overall there is plenty to enjoy.