With only his second film as director, Italian filmmaker Uberto Pasolini has produced an exquisite character study of a man we never actually meet. With Still Life, Pasolini presents a story that seems so serene and simple on the surface, yet offers so much more in its exploration of themes such as friendship, memory and death. Furthermore, the film examines the lasting implications – both medically and psychologically – for those in the military upon returning from combat. Remarkably, Pasolini takes on some serious subject manor with a film that features two of the nicest characters you could ever hope to meet. Eddie Marsan is wonderful as John May, the cypher through which we learn the story of the recently deceased Billy Stoke.

You see, John works for a London council, charged with tracking down the friends and relatives of those who have died within the municipality. Despite the meticulousness with which he goes about his job – and every other aspect of his daily life – the sad reality is that, in many cases, nobody is to be found and it is often left to John to organise the funerals and burials for the deceased. An opening montage features a series of funeral ceremonies at which John is the only attendee, having made every effort to ensure that each service accurately reflects the history and interests of the departed. John is a solitary man, living alone in a small apartment and working alone in a small office; he is a creature of habit and somewhat pedantic in the way in which he maintains his living and work space. However, his attention to detail has made him the target of council cost-saving measures and it is his last job that lures him down the rabbit hole that is the life of Billy Stoke. 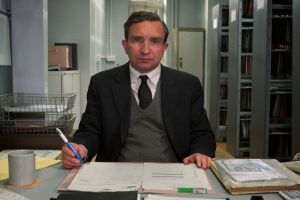 There are times when you are certain you know where this story is going, such as when John meets Kelly (Joanne Froggatt) and is obviously smitten, but Pasolini avoids the predictable and it is his decision to take the narrative road less travelled that makes the film such a surprise. As John learns more about Stoke through various characters from his life, the story veers into interesting territory and the film that emerges is a wonderful celebration of humanity. John is the type of character whose quirks could easily become an object of annoyance in the wrong hands, but Marsan finds the perfect balance between oddball and endearing. His retrenchment frees him somewhat and he starts to change his staid ways. In fact, with the exception of John’s supercilious boss Mr Pratchett (Andrew Buchan), Pasolini presents all the characters with great affection, including a couple of homeless guys who bring much humour to the piece. 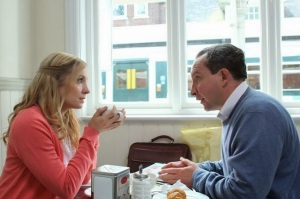 Poignancy pervades this movie, from that opening montage to scenes of John rummaging through the meagre belongings of those who have died, trying to piece together their life. The score from Academy Award-winning composer Rachel Portman is affective yet unobtrusive and the cinematography courtesy of Stefano Falivene is terrific; many of the shots evoking a beauty and serenity reminiscent of the best examples of the artwork of the type referenced in the title. There are brief visual interludes, often cutaways to objects seemingly unrelated to the narrative, that elevate Still Life to something that is a cut above the ordinary. There are numerous sweet touches, yet it never becomes saccharine or maudlin or melodramatic. Marsan (Happy-Go-Lucky, The World’s End) appears in every scene and it is perhaps his best performance thus far, relying more on mannerisms and actions (rather than dialogue) to articulate his character’s tender, compassionate nature. Likewise, Froggatt (Filth and TV’s Downton Abbey) is wonderful as Kelly, a woman who, like John, leads a somewhat solitary existence.

Ultimately, Still Life is about much more than either John or Kelly, or Billy Stoke for that matter. It takes a swipe at a society in which so many people are left to die alone and the indifference that we demonstrate towards each other, even to those with whom we co-exist in increasingly close proximity. Whilst Pasolini, the nephew of Italian director Luchino Visconti, is perhaps best known as a producer with The Full Monty and 2012’s Bel Ami, he has proven himself a dab hand as a director with a film that is very sedate yet never dull and utterly engaging from beginning to end.