For the uninitiated, every month in Film Ink (Australia’s best film magazine), Reg Diplock ponders the myriad problems with the Australian film industry and what needs to be done to ensure we “have a film industry to be proud of again”.

Typically, Reg’s words of wisdom are confined to the print edition of the magazine, however the editors have made his column available online for this month only. Given how hilarious and scarily accurate Reg is in his observations (and this month more than ever), I couldn’t help but share it with you.

Neo-cons! Honestly, is there a more pathetic creature on earth?

We’re talking about those tight-arsed, hawkish, evangelical fools who believe in Rupert, money, and the new aristocracy, with their disdain for genuine democracy, rule of law, and free press. We like to think that these conservative radicals mostly dwell in America, but there are far too many of them running loose in Australia, and what’s more, they’re ruining our film industry. How? I’ll tell you. 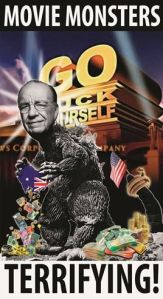 No two Aussie neo-cons are alike, but most share the following qualities: a love of America, especially Republican America; enthusiastic support for the military, coupled with a complete absence of any actual soldiering on their part; a liking for intellectual pursuits, but a hatred of left-wing intelligentsia/academia; a distrust of Aboriginals, except for Noel Pearson; superficial support of democracy, which vanishes when people they don’t like get voted in; unshakeable belief in the bias of the ABC, and the fallacy of climate change; a dislike of snobbery by “elites” combined with their own reluctance to ever associate with the Australian working class; a wish for the minimum wage to be lowered to enable cheaper housekeeping/cleaning/factory work; a love of catchphrases like “the age of entitlement”, “nanny state”, and “leftist bias”; hatred of left wing nostalgia about the sixties and seventies; knowing a little bit of history (for example, that the British ran India for two centuries) but never enough (for example, how they ran it); a reluctance to openly support the views of Rupert Murdoch, George W. Bush or Gina Reinhardt, but a great enthusiasm to attack their critics; and a passion to “free up” the market, but also defend inherited wealth and ensure that their own idiotic offspring get a head start on everyone else in life. They support the right to be a bigot and would love it – love it – if someone racially abused them so they could invoke the racist card themselves.

The ultimate neo-con goal, of course, is to recreate the Ancient Roman Empire of 2,000 years ago – either Republican or Imperial, depending on your preference. But the essentials are the same: a world dominated by an aggressive, expansionistic military superpower ruled by an outwardly-democratic-but-not-really government controlled by rich aristocratic families no matter how stupid or talentless their progeny; where the economy is underpinned by a massive underclass, and freedom of speech and judiciary decisions are manipulated by said aristocratic families. Australian neo-cons essentially want us to become a loyal province of the Empire, rather like Gaul was to Rome: we do valiant service, are good citizens of Empire, and in turn are allowed to keep some of our quaint local traditions.

Within the Aussie neo-con community, there are notable divides – some hate gays, while others are gay; monarchists face off against republicans; agnostics sit uneasily beside members of Opus Dei; opera lovers co-exist with the I-loathe-art-any-art faction. But they still manage to form a powerful lobby group, especially in 2014 Australia where the country is run by a cabal of neo-cons, including several members of our Federal Cabinet, the chairman of our biggest media organisation, our most widely-read columnist, and the richest woman in the world.

How does this affect the film industry, I hear you ask? Because neo-cons hate so much of our industry – all that government support, and red tape, and unpopular movies. Neo-cons don’t mind regulation and subsidy, as long as it’s in favour of new-aristocrat families (for example, restrictions on Pay TV licenses, development approvals at Bangaroo, and cheap rent at Moore Park), but hand-outs to liberal, left-wing, Aboriginal-loving elitists or AFTRS graduates? Yuck!

So you have the recent budget which slashed funding to Screen Australia, and the National Film And Sound Archive, and the ABC – none of which are perfect, but are all essential for this nation’s screen industry and culture. Without government support, there will be no Australian films, no Australian TV drama, and no Australian actors to clog up LA during pilot season – it’s been proven historically time and time again, but that doesn’t matter to The Institute Of Public Affairs, because if the free market doesn’t like it, it’s not worth having, apparently, and if only we could import cheap labour from the islands, this country might get moving again.

Well, the “free market” has never existed, and never will exist, because human beings have an instinctive desire to protect their children, and wealthy families have an in-built determination to hang on to their money, and will always put this first. (Both things, incidentally, helped bring down The Roman Empire, but as I said before, neo-cons tend to know a little history but never enough.) Gina Reinhardt, James Packer, and Rupert Murdoch are not examples of a free market; they are aristocrats benefiting from their inherited wealth and an unequal playing field which they try to make even less equal.

Neo-cons say that they like democracy and freedom of speech, but they don’t, really, because it risks giving them things that they disagree with. So instead of promoting things like journalistic standards and objectivity, they allow News Corp to be as biased as they want, but, oh no, not the ABC. The fact is, Andrew Bolt never would have breached The Racial Discrimination Act if he’d actually done his job as a professional journalist and not been so sloppy with the facts…but somehow, the case of Eatock v Bolt became all about freedom of speech and racial discrimination. Why wasn’t it about professional standards? Because neo-cons don’t care. (Neither do the left, it should be pointed out. They play into their hands.)

The ABC shouldn’t be biased – it should be objective. So pass a law saying that all journalists who work in Australia need to be professional and objective or they can’t practice (you know, like a doctor, lawyer, dentist, or other professional in this country). Don’t gut their funding out of revenge and ideological purity. Screen Australia should be efficient and make better movies – I’ve been bagging them in this column for fifteen years – well, bring in a quota, make them more accountable, and don’t reduce them to paupers. The National Film And Sound Archive should be more accessible to the general public – they should do more online. But neo-cons don’t genuinely stand for the high principles that they claim – they’d rather hate because that’s what they’re best at.

Regulation and government bodies are not perfect, but they are essential to protect things like fair play, legitimate competition, consumers, and our culture. Come on Australia, get the neo-cons to back off. Then maybe we’ll have a film industry to be proud of again!

*This column was originally published in the July 2014 issue of FilmInk.

Need more Reg? For a monthly examination of how to fix the Australian film industry, plus all the latest movie news, reviews, interviews and feature articles from Australia and around the world, get a subscription to Film Ink.