Few filmmakers have successfully been able to weave absurdist humour into an affecting story about friendship, mental illness and the power of music in quite the same way that director Lenny Abrahamson has done with Frank. This is a funny yet moving story about a group of flawed individuals who find solace and security in the collective of a band whose mere existence is more important than anything they may achieve. This is a wonderful movie that will no doubt be dismissed by many as just another quirky independent film, but it is so much more than that. With Frank, Abrahamson has crafted a film that is everything a movie should be. It is thoroughly entertaining, emotional, thought provoking and powerful in its examination of an aspect of the world in which we live that is rarely represented with any insight or compassion. It is emotional without being manipulative and it is funny without mocking the characters and/or their circumstances. 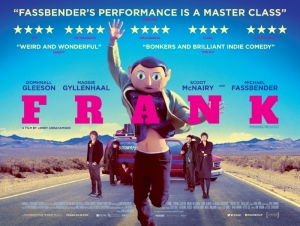 Domhnall Gleeson (About Time) is Jon Burroughs, a wannabe songwriter and musician who still lives with his parents and spends his days at a mind-numbingly boring office job. When the keyboard player in the band Soronprfbs is hospitalised after attempting to drown himself, Jon is in the right place at the right time and is drafted in as a substitute. Although the gig is a disaster, Jon makes an impression on Frank Sidebottom – the enigmatic leader of the band who wears an oversized head at all times – and is offered a permanent place in the band. When the group, which also includes Don (Scoot McNairy), Clara (Maggie Gyllenhaal), Baraque (Francois Civil) and the all-but-mute Nana (Carla Azar), head to an isolated cabin to record an album, Jon struggles to understand the motivations of the band and finds himself at loggerheads with the protective Clara. As the recording process drags on interminably, Jon takes to posting regular updates on social media that ultimately result in an offer to perform at the prestigious South by Southwest Festival in Texas. Whilst Frank is excited by the opportunity, the rest of the group are less enthusiastic, with good reason as it turns out. 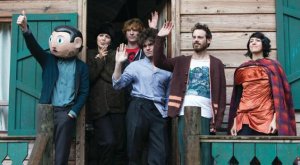 Frank never removes the fake head; even to sleep, eat or shower and, as a result, the audience, like Jon, spends a lot of time trying to work out exactly why Frank refuses to reveal his identity. What is he hiding? What is his story? Jon’s fixation is very much a statement about contemporary society; the fact that we seem to think we have the right to know everything about an individual and can find out anything we want at the click of a button. Conversely, Frank’s papier-mache appendage is a challenge to modern celebrity culture in which the face – and the image – of musical artists is often more celebrated than the music they produce. None of the other band members share Jon’s curiosity, they simply accept Frank how he is and are deeply suspicious of this newcomer to whom Frank has taken a liking. Although Frank is vague and dismissive anytime Jon tries to delve a little deeper, the reasons for the mask become clearer as the film progresses. Beginning as a hapless interloper who we initially find amusing as the fish out of water amongst this group, Jon ultimately morphs into a somewhat unsympathetic character in his determination to fulfil his own dreams of musical success with little regard for the rest of the band. 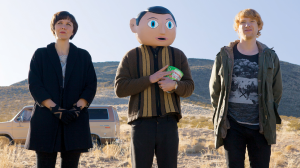 The spectre of mental illness runs throughout the narrative, sometimes tragically, but Abrahamson avoids sentimentality. There are damaged people here, but in many ways this is a celebration of those people who exist on the margins of what we generally accept as being ‘normal’. Watching this, I couldn’t help but wonder how somebody like Frank would be treated in the real world. As the enigmatic, insecure titular character, Michael Fassbender (Shame, 12 Years a Slave, X-Men) is forced to speak with his body; communicating his emotions and state of mind via posture, tics and mannerisms. He does a fabulous job in presenting Frank as a man whose talents are undermined by significant psychological distress, perhaps much in the vein of Pink Floyd’s Syd Barrett. Abrahamson has produced a highly original film that leaves you amused and moved in equal measure. A comedic, tragic, satirical, poignant paean to those who dance to a different beat. It’s weird, but it works. In fact, it is something rather exceptional.