It may have taken a while for The Broken Circle Breakdown to reach Australian cinema screens, but it was most certainly worth the wait. This Belgian film is a powerful warts-and-all treatise on the power of love, both as a force of great joy and as the catalyst for the events in our lives that cause us the most pain. Following a slew of award wins at festivals around the world, the film was nominated for the Best Foreign Language Film at the 2013 Academy Awards (where it somehow lost to The Great Beauty) and it is easy to see why this story has found so much favour with festival audiences and critics alike. This is the heartbreaking love story of Didier (Johan Heldenbergh), a banjo player in a bluegrass band, and Elise (Veerle Baetens), the sexy, vivacious tattoo artist for whom he falls head over heels. 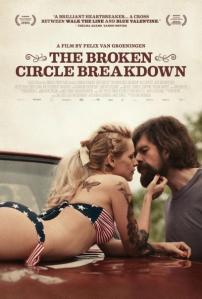 Our couple settle into a life of domestic bliss in a ramshackle caravan situated in rural environs somewhere near the Flemish city of Ghent; a picturesque setting in which chickens wander aimlessly around the yard. Soon enough, daughter Maybelle is born and the relationship between Didier and Elise only seems to strengthen as they embrace parenthood and set forth on repairing the dilapidated house that Didier has neglected for too long. However, happy families and home renovations do not an engaging drama make and when Maybelle is diagnosed with cancer, the relationship between Didier and Elise becomes strained. The tension in the story escalates but, despite claims to the contrary by some, it never drifts excessively into the melodrama realm because nothing seems exaggerated and the characters are far from stereotypical. Most movies that deal with cancer are sickly sweet and overly simplistic in their handling of such scenarios, but not on this occasion. Superb performances, particularly from Baetens and the young Nell Cattrysse as Maybelle, imbue the film with a sense of realism that makes you forget these are just characters; you feel as though you are watching real people. Director Felix van Groeningen has created an intimate world in which our connection with the family is palpable. Heldenbergh, who co-wrote the play from which the film is adapted, plays Didier as a stoic, quietly spoken musician whose personality is at odds with the much more outgoing Elise, her body adorned with tattoos that symbolise her life thus far. Despite their differences, the relationship works and Elise soon finds herself part of the band, bringing a new dimension to their concerts. 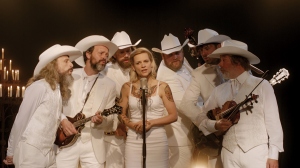 The film opens at the hospital when Elise and Didier learn that Maybelle has cancer. Next, we are privy to the moment when Didier first takes Elise home to his country compound and, from this point, the story continues to skip around in time, jumping forward and backwards to slowly reveal the full sequence of events. The decision to present the narrative in a non-linear style is a challenge at times, with fantastic editing seamlessly melding one scene into the next, even though they may be set months, or years, apart. In the end though, it all comes together beautifully. Set in the early years of the 21st century, we see the twin towers attacked on television at one point and it is George W. Bush’s decision to prohibit stem cell research – which we also see via a television broadcast – that sends Didier into fits of rage that serve as a renouncement of his love affair with America. The bluegrass music, presented via a series of terrific concert sequences, is fantastic. Although the songs – all of which are performed in English – may reflect upon the sorrows and hardships of life, they never feel depressing or downbeat in the hands of this motley group of musicians.

It is rare to find a film that is dramatically, politically, emotionally and musically rich, but The Broken Circle Breakdown delivers on all fronts. Whereas Joel and Ethan Coen preferred a piss-take of such musical styles and sensibilities with O Brother Where art Thou?, this film takes a much more reverent approach. This is a soul-stirring drama rich in heartache that never tries to accommodate genre tropes or audience expectations. This is a film about love but it is also a film about faith, with Didier particularly strident in his beliefs regarding god and religion. Whilst this is that very rarest of beasts in that it is a love story worth watching, it is much more than that. The Broken Circle Breakdown is just a fabulous film in every respect.