It is always great to see original ideas emerge in a filmmaking landscape being over-run by remakes, copies and clichés, not to mention the perpetual proliferation of sequels that fill the screening schedules at suburban cineplexes. As such, the arrival of 52 Tuesdays into cinemas is a breath of fresh air. The first feature-length drama from director Sophie Hyde, 52 Tuesdays is an engaging examination of gender identity, friendships and explorations of teenage sexuality that, whilst a bit rough around the edges at times, is an altogether more impressive film than so many of the mega-budget monstrosities with which it must compete for audience attention. From a screenplay by Matthew Cormack that is drawn from a story he co-wrote with Hyde, 52 Tuesdays tracks a tumultuous 12 months in the life of 16-year-old Billie (Tilda Cobham-Hervey) as she comes to terms with her mother’s decision to undergo gender transition, all the while trying to find her own place in the world. 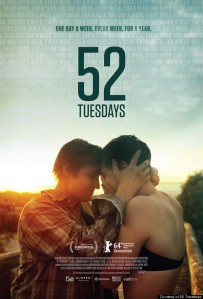 This is a film that should serve as a reminder to aspiring filmmakers everywhere about the importance of story and ideas above all else. This is the type of movie that could be made by anybody with the passion, persistence and talent to bring a good idea to life, which is not intended in any way to undermine what Hyde has achieved. The locations are realistic yet simplistic, the characters are imperfect yet sympathetic (with one glaring exception) and the performance of Cobham-Hervey in the lead role is very impressive indeed. There is a real honesty in the way Billie deals with everything that is going on around her; equal parts stubbornness, petulance, rebellion and curiosity; everything we might expect from a teenage girl in contemporary Australia. When her mother Jane/James (Del Herbert-Jane) embarks on a 12-month cycle of surgeries and hormone treatment, Billie is despatched to live with her American-accented father Tom (Beau Travis Williams), visiting her mother every Tuesday evening. Whilst much of the film’s running time revolves around these weekly interactions between Billie and James, it is the narrative diversions that make for some of the most interesting moments.

Feeling abandoned by James, the once rock-solid relationship between mother and daughter starts to splinter and Billie finds solace in her friendship with Jasmine (Imogen Archer) and Josh (Sam Althuizen). The trio spend their time wandering the streets at night or holed up in abandoned buildings, engaged in the type of sexual experimentation in which so many teenagers indulge, no matter how much parents and others might like to think otherwise. There is a real honesty in the interactions between the three teenagers, all of which Billie records on video. Also in the mix is Billie’s uncle Harry, a grotesque character whose presence is grating and, ultimately, completely unnecessary. It is hard to tell whether it is the character or the performance by Mario Spate, but his existence is a real blight on this otherwise impressive film. In the lead role, Cobham-Hervey anchors the piece with an assured performance that belies her lack of experience, revealing the insecurities that lurk beneath Billie’s outwardly confident persona with subtlety and skill. Whilst not entirely shocked by her mother’s decision, Billie feels as though she is being treated like a child and this resentment builds as the year progresses. With her father busy at work, Billie is left to fend for herself and uses the time to investigate her own identity and inclinations.

Whilst the rest of the non-professional cast are effective enough, with Archer particularly impressive as Jasmin, much of the authenticity that permeates the film is perhaps due to the fact that it was shot only on Tuesdays over the course of a year. The scenes were shot consecutively and whatever was shot on any given Tuesday became the story for the corresponding day in the film. The actors were given scripts one week at a time and were only given the scenes in which they appeared. With an engaging story, an innovative approach to the production process, a star turn from yet another talented young Australian actress and a combination of stylistic elements such as the cinema verite-style footage from Billie’s camera and the flashes of real world news footage used to introduce each of the 52 ‘chapters’, Hyde has constructed a challenging, poignant and thoughtful film in which complicated issues are handled with intelligent restraint. 52 Tuesdays ultimately delivers on most fronts; it’s just a shame about Harry.