There have been myriad movies made that feature the chaos and craziness of fraternity life in American universities, from Animal House to Revenge of the Nerds to the abysmal Sorority Boys or the female-centric The House Bunny, this is a genre that has never really aimed too high. The latest entry into this mostly mediocre collection of films is Bad Neighbours, starring Seth Rogen and Australia’s own Rose Byrne. Directed by Nicholas Stoller (Forgetting Sarah Marshall, The Five-Year Engagement), Bad Neighbours offers everything we have come to expect from films of this type, with the central point of difference being that that the debauchery takes place in the suburbs rather than on a university campus. Whilst the change is setting is the set-up for everything that follows, it is this shift to the suburbs that makes the entire series of events somewhat problematic. 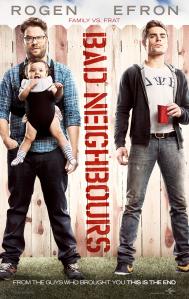 There are those who will say that the film critiques the attitudes and behaviour of young men and the failure by university administrators to address excessive drug and alcohol consumption and the mayhem that results, as well as the challenges faced by young people in making the transition into parenthood and the various responsibilities that come with it. If the filmmakers had made an effort to address these issues in a more mature way, it may have made for a more engaging experience because, ultimately, this is just another frat movie that celebrates the arrogance and excess of young men living collectively with little accountability for their actions. Rogen and Byrne are Mac and Kelly Radner, a young(ish) couple with a toddler who invest everything they have to set up home in the suburbs. However, soon after moving in, the Radner’s discover that a fraternity has purchased the house next door and, from this point, the story is nothing more than a series of tit-for-tat retaliations that lead to increasingly outlandish attempts at one-upmanship. Although initially lured into the maelstrom of music and good times on offer next door, the novelty soon wears off for Mac and Kelly and, from this point, they set out to ‘shut down’ their neighbours; actions that only spur the frat boys into even more outlandish behaviours. 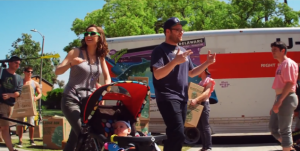 In a case of art imitating life, the recently rehabbed Zac Efron plays Teddy Sanders, the fraternity President committed to nothing other than having a good time and the obligatory hazing of pledges, with all the humiliations that this entails. The fact that he maintains a chiselled physique despite his insalubrious lifestyle is impressive if utterly unlikely. It really seems as though Efron is simply playing a version of himself; relying on good looks and charm rather than any real talent to make his way in the world. For Rogen, his character and performance are very familiar to pretty much everything he has done before in that Mac is a chubby, immature and somewhat clueless 30-something with a mundane job who has somehow snared a beautiful Australian wife. It is Byrne who fares the best of the various players here, further demonstrating a flair for comedy that she honed in superior product such as Bridesmaids and I Give it a Year as well as Stoller’s Get Him to the Greek. Dave Franco is conflicted as Teddy’s second-in-command, while Christopher Mintz-Plasse, Ike Barinholtz and Carla Gallo occupy supporting roles that don’t add too much of substance to the course of events. Lisa Kudrow also makes an appearance as a University Dean whose attitude is probably fairly accurate in its depiction of the somewhat ambivalent attitude towards the raucous behaviour of college fraternities. 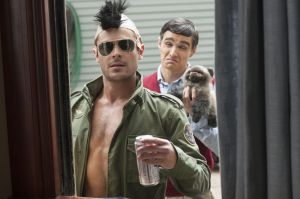 There is fun to be had here but the few genuine laugh-out-loud moments are tempered by many more that don’t work as well. As you would expect, everything is pushed to extremes and, as is the case so often in films of this type, the police are rendered as incompetent and ineffective. Likewise, the rest of the neighbourhood are all but invisible, which seems highly unlikely given the level of chaos unleashed as the hostilities between neighbours intensifies. There seems little doubt that this film will prove popular with young men and perhaps that is all that really matters as far as turning a profit. Whilst the ending seems an attempt to deliver some kind of warning shot with regard to the consequences of partying to excess at the expense of everything else, it really is a somewhat hollow gesture that seems contrived and disingenuous given what unfolds beforehand.