For a movie about artificial intelligence, Transcendence is pretty dumb at times. Helmed by first time director Wally Pfister, the acclaimed cinematographer who nabbed an Academy Award for his work on Christopher Nolan’s Inception, this film presents itself as something quite profound, but it lacks clarity and credibility in its attempt to explore an issue that is highly relevant in an increasingly technological age. It isn’t hard to tell that Pfister has spent considerable time working with Nolan as Transcendence is a film of big ideas, in particular the threat that the continued development of artificial intelligence capabilities might bring. Based on a script from Jack Paglen, Transcendence starts well enough and maintains interest for as long as the events remain imbedded in a world of science and technology that we can accept as far-fetched but perhaps possible one day. Once it moves beyond the logical and into a more fantastical science-fiction realm, it becomes hard to take it too seriously.

Johnny Depp plays Will Caster who, as the foremost researcher in artificial intelligence, is determined to create a machine that combines the collective intelligence of everything with a full spectrum of human emotions. Whilst his experiments have made him famous and much admired by many, there are those who see his work as a threat to humanity and are determined to stop him, such as the group calling itself Unplug. Kate Mara’s Bree seems to be the leader of the group, although it is never entirely clear who makes the decisions. When Caster dies after being shot by an Unplug member, (no spoiler here as the trailer tells us this), his death inadvertently leads to the development of advanced technology beyond what even he had imagined. With wife Evelyn (Rebecca Hall) and best friend Max (Paul Bettany) leading the charge, Will’s brain is connected to a series of computers in an attempt to capture his consciousness and enable his mind to live on forever. 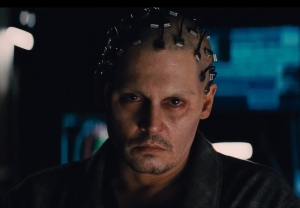 Needless to say, not everything goes according to plan because, while the procedure initially seems successful, Will’s thirst for knowledge evolves into an omnipresent quest for power. Soon enough, he is able to take control of the internet and, ultimately, other people. So much happens in this movie so quickly that there were many times when I found myself asking ‘what the?” For example, one minute Evelyn is recruiting contractor Martin (Clifton Collins Jnr) to construct an elaborate underground facility in a broken-down desert town and the next minute everything is operational with staff in place and thousands of solar panels installed to power the facility. At another point, Bree declares that Unplug needs to strike immediately, adamant that waiting is not an option. However, the next scene occurs two years later and nothing has happened, a delay which ultimately makes the task much harder and lends itself to a more action-packed showdown between the two sides, which was perhaps the point.

Depp is effective enough in a role that doesn’t really require much of him, particularly when he is nothing more than a talking head on a computer screen for much of the time. Likewise, Hall makes the best of the material, although it takes her far too long to become creeped out by Will’s all-seeing, all-knowing cyber presence. Bettany is somewhat bland as the side-switching Max, who seems to be in a constant state of confusion, while Mara is much better as the suitably grungy Bree. Interestingly, in a movie that is ostensibly about a man who sees himself as a god-like figure, the almighty himself in Morgan Freeman features in a supporting role as a fellow researcher and former colleague who teams up with Cillian Murphy’s FBI agent in a bid to thwart Will’s evil plans for world domination and, yes, at times it is as corny as that sounds. 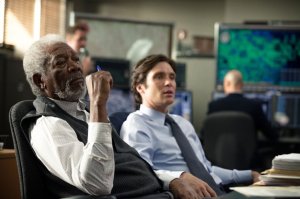 There is a wealth of talent involved in this production and no doubt it all seemed very exciting on paper, but the story just becomes bogged down by pretention and implausibility. There are the great visual flourishes we would expect with Pfister at the helm and the concept of artificial intelligence is certainly a topic worth exploring on film. The problem is, of course, that Spike Jonze’s Her did it so much better earlier this year. Ultimately, Transcendence is a long way from the thought-provoking, insightful movie that it could have been.