Having somehow missed seeing the critically lauded Indonesian actioner The Raid during its cinematic run in 2012, I approached the inevitable sequel – The Raid 2 – with little prior knowledge of the characters and few preconceived notions of what to expect. As such, I would like to think that I was able to evaluate the film on its own merits – which are considerable – unencumbered by any admiration, or otherwise, for the original. However, I can’t help but feel that my unfamiliarity with The Raid has had some impact on my capacity to connect with the characters and the world of rampant criminality in which they exist. Whilst there is demonstrative skill from Welsh director Gareth Evans and his leading man on show here, those areas in which the film is lacking – such as a logical and cohesive storyline for starters – only serve to undermine those moments that are genuinely impressive. 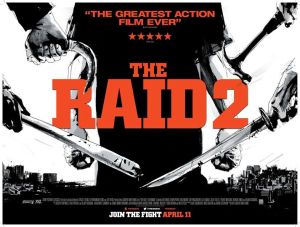 On the surface, the story – and I use that term very loosely – is one we have seen many times before. A police officer is called upon to infiltrate the criminal underworld supposedly in an effort to identify corrupt police who are protecting the criminal factions and their various enterprises. Stepping up to the task is Rama (Iko Uwais), a lean, mean fighting machine who is promptly despatched to prison in an effort to ingratiate himself with Ucok (Arifin Putra), the son of criminal kingpin Bangun (Tio Pakusodewo). When a fight breaks out in the prison yard – one of many lengthy and altogether preposterous action sequences – Rama emerges as Ucok’s saviour and the wheels are in motion. Upon his ‘release’ from prison, Rama is welcomed into the fold by Bangun and from this point things become very murky indeed. The ridiculously handsome Ucok is arrogant, ambitious and, fed up with his father’s ongoing treaty with Goto (Kenichi Endo) – the leader of a Japanese criminal gang – he joins forces with another nefarious figure in Bejo (Alex Abbad) to splinter the peace between the groups and assume control.

Essentially, the film is not much more than a series of elaborate stunt and action sequences as the two sides face off, with Rama caught in the middle. These sequences are impeccably staged and superbly photographed but Evans, who also served as editor, needed to show more restraint in the cutting room. Whilst they are cut together impeccably in turns of capturing the sheer physicality of these encounters and the consummate skill of the performers, there is too much of the same and many of these scenes are far too long. Of course, why so many men (and women) would continue to inject themselves into these violent fights is difficult to fathom. I mean, surely criminals of this ilk would simply resort to other methods in dealing with their enemies? So, lack of logic aside, some of these scenes are brilliantly realised, such as the fight inside a speeding car that is captured from all angles.

Whilst Rama is clearly the hero of the piece, it is some of the peripheral characters that are the most curious. At least Prakoso (Yayan Ruhian), Baseball Bat Man (Very Tri Yulisman) and Hammer Girl (Julie Estelle) offer us something different from the myriad nameless and faceless combatants that inhabit this world. Hammer Girl is perhaps the most interesting character of all and it is a shame that much of the mystery that surrounds her silently sexy persona is undone with an unnecessary reveal upon her demise. At the end of it all, Rama has despatched an untold number of bad guys, seemingly with impunity, and does seem to have brought the crime gangs to their knees, yet it’s not really any clearer with regard the identity of the various corrupt police and politicians that he was seeking to expose.

There is no doubt that Evans is a talented filmmaker as there are several splendid moments in which the mobile camerawork – dolly shots, cranes, the camera being passed between operators to capture a scene from all perspectives – is the star of the show. Ultimately, it is the lack of a cohesive narrative and the unconvincing motivations for Rama’s decision to go undercover in the first place that prevent the film from truly soaring. One less fight scene to allow additional exposition of characters (such as Rama’s wife and child) and their relationships would have made it much easier to care about why he was putting himself in such extreme danger. The Raid 2 is an exhilarating thrill ride that ultimately leaves you feeling a bit empty once the adrenalin subsides.