It is easy to dismiss The Monuments Men as nothing more than a vanity project for George Clooney. After all, in addition to taking on the lead role of Frank Stokes, Clooney also directed, produced and co-wrote the adapted screenplay (with Grant Heslov) based on real life characters and events. However, whilst the film very much puts Clooney front and centre of the narrative, the story does have some interesting things to say about art and its relationship to culture, history and identity, even if Clooney is overbearing at times in trying to ram the message home. 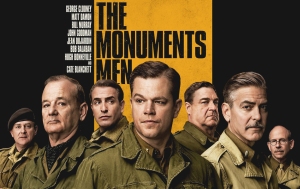 Set towards the end of World War 2 with the Nazis in retreat, Stokes is the leader of a motley crew of artists and art experts charged with locating and retrieving artworks stolen by the Nazi regime during their reign of terror across Europe. With nary a skerrick of military experience between them, these mostly middle-aged men set forth into the warzone in search of pilfered paintings, sculptures and other priceless artefacts. Clooney gathers an impressive cast of sidekicks in Matt Damon (James Granger), Bill Murray (Richard Campbell), John Goodman (Walter Garfield), Jean Dujardin (Jean Claude Clermont), Bob Balaban (Preston Savitz) and Hugh Bonneville (Donald Jeffries) as the eponymous Monuments Men, a collection of artists, academics, museum directors, curators, historians and the like drawn from all corners of the art world. With such a cast, there are plenty of lighter moments in the film and it is the inconsistent tone that is perhaps the biggest problem with the film. There are some moments that are almost Hogans Heroes-ish in their staging, while watching Bill Murray in basic training harks back to Stripes. 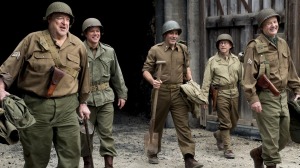 The Monuments Men is very much WW2-light in that it offers little real insight into the horrors that the people of Europe endured during this time. There is great emphasis on the theft of the art and the significance of these pieces as cultural beacons for the subjugated populations, however we never really see or hear from those people as it is left to Stokes, via earnest speeches to his men, to explain the how these pieces are intrinsically linked to history, culture and identity. Although not all of the group make it out alive, this is, by and large, a bloodless rendering of this most brutal period in history. There are a few small run-ins with the enemy here and there, but most of the resistance these men face is from the allied military machine that doesn’t appreciate the importance of their task and, more often than not, refuses to render assistance. Heck, even FDR asks Stokes if the largely successful outcome of their mission was worth the loss of life.

As you would expect from such a cast, everybody is solid in their roles, including Dimitri Leonidas as Sam Epstein, a Jew who fled Germany with his family and serves as a driver and interpreter for the group. However, whilst Clooney has cast his performers as an accurate reflection of the characters they represent – Dujardin and Bonneville as the French and British members of the squad for example – I found it disappointing to see Cate Blanchett in the role of French art expert Claire Simone. This is no slight on Blanchett, who is obviously a terrific actress and delivers a perfectly adequate performance, but there are innumerable French actresses who could have brought greater authenticity to the role. 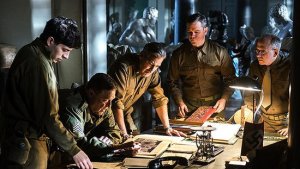 Although Clooney has taken considerable liberties with the events and the characters, there is no doubt that this is an important story worth telling. It is probably fair to say that without Clooney’s significant star power and the clout that it affords him in Hollywood, this movie may have never been made, which perhaps reflects the types of films being privileged by the big studios. Without the real Monuments Men being prepared to risk their lives in the name of art, many of the great masterpieces, such as the Ghent Altarpiece and Madonna of Bruges, may have been lost forever. Yes, The Monuments Men explores the importance of art as historical record and what the impact of this history being erased might be; it’s just a shame that Clooney feels the need to continually tell us this over and over again.