There are some movies that leave you shaking your head, questioning how they even came to exist in the first place. An example of such a film is Are We Officially Dating?, a so-called romantic comedy starring Zac Efron that fails to engage on any level. I can only assume that Efron’s perceived drawing power played a significant role in securing a green light for this project. Neither romantic nor particularly funny, this movie is a grossly misogynistic exercise that renders women as nothing more than objects to be used for sexual gratification. Written and directed by first timer Tom Gormican, whose only previous claim to fame is a producer credit on the awful Movie 43, the film is ostensibly about three 20-something New York men who vow to avoid any serious romantic entanglements in the interests of maintaining their ‘freedom’. 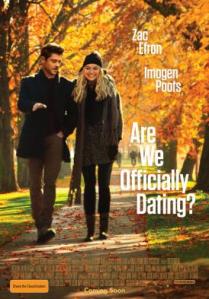 Efron plays Jason, a cocky graphic designer for a publishing house who cannot bear the thought of being ‘burdened’ by a girlfriend, insisting that all his relationships with women must remain strictly casual, devoid of any emotional attachments. He badgers his two best friends Daniel (Miles Teller) and Mikey (Michael B. Jordan) into adopting a similar philosophy and, needless to say, it doesn’t take long before all three find themselves struggling to uphold their promise. Overloaded with clichéd scenarios – such as Daniel falling in love with his friend Chelsea (Mackenzie Davis) – Are We Officially Dating? is an insipid addition to a genre already overloaded with mediocre musings on love. There is nothing that surprises in this story at all and it is this lack of originality – coupled with three lead characters about whom it is difficult to care – that render this a very underwhelming experience.

Perhaps the most disappointing aspect of the whole thing is the fact that those involved have proven themselves capable of so much better. Jordan, who earned much acclaim for his performance in Fruitvale Station, is the standout of this sorry bunch as a guy desperate to reunite with his wife Vera (Jessica Lucas) despite the pressure being applied by his friends to play the field. Teller was far more impressive in The Spectacular Now, while British actress Imogen Poots, who also fared much better recently in The Look of Love, plays Ellie, a character who transforms from headstrong and independent to hopeless romantic in a matter of minutes, ultimately willing to forgive Jason’s appalling behaviour. The fact that Jason has mistaken her for a prostitute is the running gag throughout the first part of the film. In fact, much of the so-called humour is derived from the way in which these guys discuss and ultimately treat the women in their lives. The screenplay lacks any spark and, for much of the duration, everybody seems as though they are simply going the through the motions.

Whilst it seems as though Gormican has set out to make an edgy, adult-oriented film – perhaps a Sex and the City for boys – this film fails to bring any real insight to the table. Laden with toilet humour (literally) and the coarse language and sexualised banter that may well be indicative of the way young men communicate, the film is as about as sexy as a soggy sandwich. Contrivances galore leave you knowing what will happen next and, unfortunately, there is never a moment when your expectations fail to materialise. Such predictability may please some people, but I found it utterly infuriating. Released in the United States as That Awkward Moment, this is a tame film masquerading as a raunchy romp. The only genuine moments of levity are those featuring Josh Pais as Fred, a co-worker at the publishing company whose interactions with Jason and Daniel are both awkward and amusing. Other than some terrific visuals of New York City streetscapes, there is very little else to recommend this film. Given that so many great movies fail to gain the support they deserve from distributors and cinema operators, it is disheartening to see schlock such as this enjoying wide release.