When Wolf Creek was released in 2005, the timing was impeccable. With the Australian and international media in a frenzy over the disappearance of British backpacker Peter Falconio in the Australian outback, Wolf Creek hit cinemas to take full advantage of the front page headlines about the dangerous types who lurk in the Australian wilderness. With the trial against Falconio’s killer Bradley Murdoch in full swing at the time, coupled with the canny decision to market the film as ‘based on real events’, it is no surprise that the movie proved a staggering commercial success. The fact that the narrative didn’t accurately reflect any actual events was beside the point. So, 2014 sees director Greg McLean and leading man John Jarratt returning to the source of their success with Wolf Creek 2. McLean has again turned to the headlines of the day to frame the story, however this time it is the frenzy of xenophobia being propagated by politicians and mainstream media that sits front and centre of the narrative.

It seems nothing much has changed for pig-hunting psychopath Mick Taylor (Jarratt), as the cache of bodies in his underground hideaway clearly attest. The film opens with Taylor being harangued by a couple of dodgy cops with nothing better to do and anybody familiar with the first film knows the fate that awaits them. Sure enough, it isn’t long before Taylor takes his revenge. From here, we switch to follow German backpackers Rutger (Phillipe Klaus) and Katarina (Shannon Ashlyn) as they hitchhike their way through Australia’s interior, landing ultimately at Wolf Creek where, unable to secure a ride, they set up camp for the night. Needless to say, they are duly discovered by Taylor, who is far from pleased to see a couple of ‘Nazi krauts’ in his territory. While Rutger is quickly dispensed in a typically brutal fashion, Katarina makes a dash for freedom, during which she stumbles across Englishman Paul Hammersmith (Ryan Corr). A chase ensues with Taylor utilising all means of transport to track his prey, from semi-trailer to horseback, mercilessly despatching anybody who happens to get in the way. 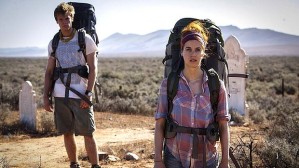 Other than the obvious evidence of a much bigger budget this time around – flinging a semi-trailer off a cliff is a luxury few Australian filmmakers enjoy – there isn’t really much that sets this film apart from the first instalment. It doesn’t matter if you haven’t seen the first film because this works as a stand-alone movie that doesn’t require any prior knowledge of what has gone before but, at the same time, it suffers from the fact there is so little that sets it apart from the original. Mick Taylor is the same character who does the same things he did before and we don’t really learn anything about how he came to be this hate-filled redneck. The film very much plays as an allegory for Australia’s border protection policies in that Mick possesses an irrational hatred of foreigners – referring to them as ‘vermin’ and ‘noxious weeds’ – seemingly for no reason other than they are from somewhere else. After all, what is the difference between a psychopath who kills foreigners because he doesn’t want them in Australia and a Prime Minister who facilitates the killing of asylum seekers in detention centres because he doesn’t want them in Australia?

The real shortcomings of the film lie with the lack of a real story and the absence of any character development. Mick Taylor kills some people, and then kills a few more, then tortures another and then that’s it. It isn’t the violence that’s the problem because it is often cartoonish and hard to take too seriously, it’s just the fact that none of the characters are particularly interesting. Most of what Mick does has been seen before in Wolf Creek and therefore comes as no real surprise. The very best sequels broaden our understanding of the key characters and the world in which they live and this is where Wolf Creek 2 fails to resonate. A lack of originality and the fact that the film doesn’t really expand our understanding of the sadistic central character prevents Wolf Creek 2 from appearing as anything more than a cynical bid to cash in on the success of the original film.