Over the last 25 years or so, Hollywood has seemingly been afflicted with a severe case of gerontophobia; a fear of old people. Unless it is a washed-up action star desperately trying to cling to the last remnants of their credibility (The Expendables for example), Hollywood has little to offer actors over 60 beyond the whacky grandparent (Meet the Fockers) or curmudgeonly neighbour (Gran Torino) that are, more often than not, constructed as objects of derision. Such portrayals do nothing but propagate stereotypes and the various stigmas attached to getting older. As such, it is very much the independent and European filmmakers on whom we must rely for quality films in which older characters are front and centre of the narrative. In the last few years, the likes of Amour, The Best Exotic Marigold Hotel and Away from Her have proven that films featuring lead characters of a more mature vintage can be as engaging, amusing and emotionally rich as any other. It all comes down to the material really. As such, Jim Broadbent and Lindsay Duncan are splendid in Le Week-End as a British couple who spend a confronting and confrontational weekend in Paris. 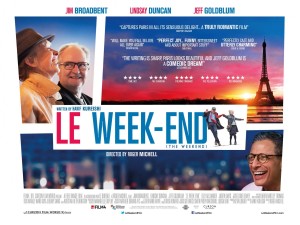 Directed by Roger Michell from a screenplay by Hanif Kureishi, Le Week-End offers a warts-and-all examination of the challenges and complexities of relationships as preferences and priorities change over time. For their 30th wedding anniversary, Nick (Broadbent) and Meg (Duncan) return to Paris, the city in which they spent their honeymoon. Meg immediately rejects the depressingly beige accommodation that Nick has acquired, impulsively checking them into swanky alternative digs, a decision that kick starts a weekend of revelations and ruminations that fluctuate from sharply comic to deadly serious. Nick is a pessimistic university lecturer who, having been forced into early retirement after daring to be honest in his assessment of a student’s work, is terrified at what the future might hold. Meg, on the other hand, wants to give up her job as a teacher and embrace the opportunities on offer now that their children have vacated the nest. We quickly discover that they are in conflict on most matters, with Meg unable to tolerate Nick’s insecurities and his reluctance to let go of the past. Nick is a blithering mix of resignation and desperation, while Meg possesses a directness that is cruel at times, yet seems her only means of waking her husband from his dreary delusions.

Despite some extremely funny moments, many of which come via Jeff Goldblum as Nick’s ultra-successful but utterly insufferable college friend Morgan, this is not a genial comedy in which we simply laugh at old people being whacky. Goldblum is fabulous as a guy who, despite having achieved substantial success as an academic and author, holds the considerably less accomplished Nick in very high esteem, for reasons that neither Nick nor Meg can fully understand. It is a dinner party at Morgan’s lavish apartment that ultimately brings matters to a head between Nick and Meg, both of whom find themselves resenting everything about their host, albeit for different reasons. In its exploration of the nature of relationships, Le Week-End is rife with mood changes and tonal fluctuations that can be jarring at first until you settle into the rhythm of a couple who somehow remain connected despite seeming to exist in completely different worlds. Black humour permeates the narrative and it is uncomfortable at times, but Michell never resorts to condescension or mawkish sentimentality. 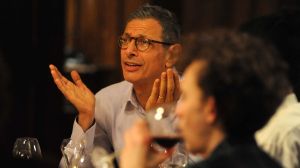 Broadbent, who was so awful so recently in Filth, is great here as a doting companion struggling to come to terms with the upheavals in his life. Duncan is equally impressive as a woman frustrated to the point of despair and desperate to forge a new path for herself, with or without her husband. In their third big screen collaboration together following The Mother and Venus – both of which also happen to feature central characters of advanced years – Michell and Kureishi have produced a film that is funny and serious at the same time. Emotionally engaging and full of passion, Le Week-End is a well-scripted and performed British comedy-drama that delivers an altogether more interesting examination of love than the cookie-cutter romances that typically clutter multiplex screening schedules.