With Inside Llewyn Davis, Joel and Ethan Cohen have skewered the romanticism so often embedded in tales of the folk music scene of the 1960’s. The titular Davis is a hapless folk singer clinging to the remnants of a career – if you could call it that, given that he has absolutely nothing to show for his endeavours – in the aftermath of the suicide of his performance partner. A modest film compared to their last outing – the western remake True Grit which has proved to be their most successful film yet – Inside Llewyn Davis is a melancholy comedy set within New York’s Greenwich Village that tracks the tribulations of a talented singer who, through an uncanny ability to piss off everybody who tries to help him, undermines his own career trajectory.

It is to the great credit of Oscar Isaac in the lead role that we are willing to spend this time with a man who is, by and large, eminently unlikable. Yes, it’s true that Davis can’t cut a break, but that is in large part due to his abrasive personality and refusal to compromise. Davis has a desperate need for acknowledgement, but is too often the cause – sometimes unwittingly, sometimes not – of the myriad setbacks that befall him in his effort to establish himself as a serious musician. However, he is such a hopeless case, that you kinda end up wishing for him to succeed, if for no other reason than it will enable him to stop sponging off the few people with whom he enjoys any semblance of friendship. Foremost amongst his diminishing circle of friends is Jean (Carey Mulligan), who takes great delight in reminding Llewyn about all of his shortcomings. Although married to Llewyn’s friend and fellow singer Jim (Justin Timberlake), Jean has been having an affair with Llewyn and is now pregnant without any certainty as to the paternity of the child. Mortified by the thought that hapless Llewyn could be the father, she hits him up for money for an abortion. In one of the funnier moments of the film, Llewyn actually asks Jim if he can borrow the money for the termination (without revealing the reason for the loan, of course). 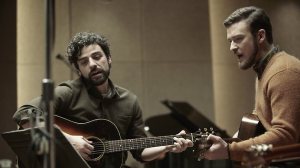 Jean is unrelenting in her foul-mouthed attacks on Llewyn’s character, while at the same time unable to completely distance herself from him. Despite his shameless freeloading, the sheer hopelessness of Llewyn’s plight also draws sympathy from others, such as Mitch and Lillian Gorfein (Ethan Phillips and Robin Bartlett) and Pappi (Max Casella), the owner of the Gaslight Café where Llewyn performs regularly. As good as many of the performances are, with John Goodman, F. Murray Abraham, Garrett Hedlund and Adam Driver also featuring, there are some aspects of the film that seemed contrived. Jean’s attitude towards Llewyn is over-the-top given her complicity in their deception, especially when you find out that she has also slept with Pappi, while Llewyn’s road trip to Chicago, during which he is subjected to endless ridicule from Goodman’s disagreeable jazz musician Roland Turner, only serves as a distraction to a story that is as much about a particular part of New York as it is about any of the characters. 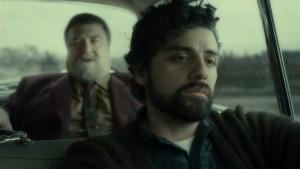 The films looks fabulous, the images realised with crystal clarity and the scenes constructed with considerable authenticity, or so it seems to somebody who can only imagine what this city and its people were like at the time. This is not the first time that the Coen’s have presented a central protagonist who just can’t seem to get the break they need (think Barton Fink), but this is on par with anything they have done before. Whilst not as laugh-out-loud funny as some of their previous comedies (such as Raising Arizona or The Big Lebowski for example), there are many moments of mirth embedded within Llewyn’s quest for the success that he, for most of the film anyway, believes he deserves. Whilst the film ends with Llewyn sitting slumped in an alley – having been beaten by the husband of a performer he heckled the previous evening – it is the glimpse of a young Bob Dylan performing at the Gaslight, coupled with our knowledge of the overwhelming success he has subsequently enjoyed, that ultimately delivers the knockout punch to Llewyn’s aspirations.