The latest in a long line of films with a narrative arc that is almost too big to fit effectively within the confines of a feature film, How I Live Now tracks the journey of an American teenager caught up in the aftermath of a nuclear attack on London. Directed by Kevin McDonald (The Last King of Scotland, State of Play) and starring supremely talented Irish actress Saoirse Ronan (Atonement, Hanna) as Elizabeth, or Daisy as she prefers to be called, How I Live Now is set in the very near future and poses a scenario that might not be as far-fetched as we would like to think. Once the setting is established and the characters are introduced our group of youngsters are forced to battle for survival and, ultimately, a return to the idyll that was their lives before war erupted.

A 16-year-old Daisy has been sent to stay with the British relatives of her deceased mother – Eddie (George MacKay), Isaac (Tom Holland), Piper (Harley Bird) and next door neighbour Joe (Danny McEvoy). Upon arrival in London, the pierced, petulant Daisy articulates her utter disdain for the cousins with whom she is staying and the father who sent her there, initially refusing to engage with the others. However, within 40 minutes or so of running time, her defences have been breached and everybody is getting along famously, frolicking in the picturesque countryside. When London is attacked and they are instructed to evacuate their home, the kids hide out in a nearby barn in an effort to avoid detection. A romance between Daisy and Eddie intensifies at lightning speed and they consummate their relationship before soldiers open fire on their hide-out to set the wheels in motion for the action that follows. 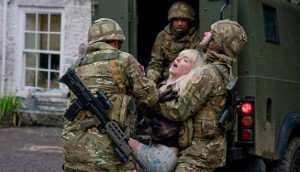 Separated from the boys by the authorities, Daisy and the somewhat annoying Piper are transported to a fenced off suburb that now serves as a detention centre of sorts and it is not long before they are plotting their escape, which is ultimately achieved with very little resistance. Having promised Eddie that she would meet him back at the house, Daisy sets off for home with Piper in tow. Of course, they encounter some setbacks along the way, including a run in with some decidedly dodgy types and the loss of their compass and map (a convenient narrative complication). To its credit though, the film doesn’t shy away from exploring the consequences of such a scenario in that not all of the youngsters survive.

Based on the young adult novel by Meg Rosoff, the premise of the film is hardly original, a cross between Tomorrow When the War Began and The Hunger Games, both of which were also adapted from novels. Whilst it was published before The Hunger Games books, How I Live Now came several years after the Tomorrow When the War Began series and the narrative similarities are striking. Ronan does the best she can with the character, whose jumbled inner thoughts are presented in voiceover and hint at some kind of telepathic connection with Eddie. There also seems to be some link between these interior monologues and the pill Daisy must take every day, perhaps linked to the guilt she feels for the death of her mother during childbirth and part of the reason for her banishment to England.

I had high hopes for this film given the talents of the personnel involved and, whilst it is far from terrible, there is definitely something lacking in the overall power of what should be an edge-of-the-seat thriller given the potential dangers facing the young protagonists. However, the music is first rate and the British countryside is captured in all its romanticised glory by German cinematographer Franz Lustig. Ultimately, How I Live Now is ambiguous through an absence of the larger political picture that leaves the film devoid of any broader context in that no culprits are identified, nor the reasons for the attack, and there is no explanation as to why British citizens are being placed in camps. Furthermore, the grimier moments of the film – rotting corpses piled up and abandoned, allusions to rape and fleeting moments of violence – might make the film unsuitable for younger audiences, yet will hardly appease the older crowd hoping for something as powerful and thought provoking as Alfonso Cuaron’s Children of Men.