Bruce Robertson is not a well man. Of that much we are certain. Played by James McAvoy resplendent with perpetually bloodshot eyes and a ginger beard, Robertson is the central character in the film adaptation of Irvine Welsh’s Filth. Robertson is a morally compromised Scottish detective whose life and career are spiralling out of control. With the exception of Danny Boyle’s Trainspotting, previous attempts to adapt Welsh’s works have proven less than successful and this effort also falls a long way short of Boyle’s benchmark. Directed by Jon S.Baird, who also wrote the screenplay, Filth has caused some outrage about some of the more grotesque moments, but for me the biggest failing is the fact that the film doesn’t go far enough. It desperately wants to be seen as something more outrageous than it really is. 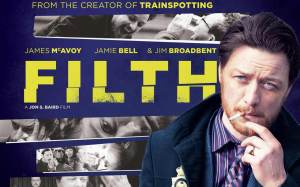 Whilst it can never be expected that any film will be the same as the book on which it is based, there is no doubt that our familiarity with the original story and our relationship with it will shape how we embrace any subsequent film version. This was certainly the case for me in this instance. I read Filth several years ago and I remember thinking at the time that the book could never been made into a film without significant changes and/or omissions for reasons other than brevity or narrative clarity. I just knew that the behaviour of the characters and the nature of the sex and violence would make it a difficult sell as a film. It is not surprising therefore that Filth, much like other films drawn from books inhabited by extreme characters such as American Psycho, could never really be expected to bear much resemblance to the novel from whence they came.

McAvoy’s Robertson is on the brink of physical and mental collapse. Tormented by hallucinations, guilt over the death of his younger brother and the breakdown of his marriage, Robertson relies on sex, alcohol and drugs to ease the pain, all the while gunning for a promotion to Detective Inspector. The film opens with the murder of a Japanese student and, whilst Robertson’s investigation into the crime is at the core of the narrative, the story veers off into so many dark corners of Robertson’s addled existence that the case itself is largely forgotten. You see, Robertson hates everybody, himself included, and much of the film focusses on his efforts to damage as many people as he can, including Bladesey (Eddie Marsan), the one person who has extended Robertson any kind of friendship. As Robertson’s hedonistic downward spiral gathers momentum, the film itself becomes more and more ambiguous and bogged down by unnecessary diversions, such as Jim Broadbent’s ridiculous turn as the bizarre Doctor Rossi and the narration from wife Carole (Shauna MacDonald). 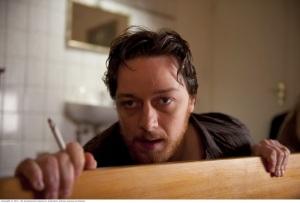 Almost all of the women in this film get very short shrift, with only Imogen Poots as Detective Drummond presenting as anything more than a conduit for Robertson’s perversions. So mired in self-loathing is Robertson that he can’t even bring himself to accept the gratitude and potential companionship of Mary (Downton Abbey’s Joanne Froggatt), a woman who has witnessed the good buried behind the crumbling exterior of his mind and body. Despite the best efforts of Baird and a suitably manic performance from McAvoy, it just doesn’t work as well as it should. Even those moments designed to shock the most – such as Robertson blackmailing an underage girl into performing oral sex or his penchant for erotic asphyxiation – are ultimately unconvincing in their efforts to construct Robertson as beyond redemption.

It seems to me that the filmmakers have tried to have it both ways. On one hand, Baird has constructed Robertson as a grotesque character seemingly devoid of charm or any sense of morality, only to filter his behaviour via a back story that engenders some sympathy and a cast of fellow police officers who actually seem much more pathetic, albeit in less hedonistic or self-destructive ways. For those unfamiliar with the book, this film might be a satisfying enough exploration of the darker side of human nature, but I was certainly expecting something that pushed the envelope even further. A risk, it seems, that nobody was prepared to take, which is what ultimately renders Filth as a somewhat underwhelming experience.