The Supanova Pop Culture Expo is done and dusted for another year with huge crowds packing Brisbane’s RNA Showgrounds over the weekend. So, what was all the fuss about? Well, for a large portion of visitors, Supanova is really nothing more than a massive marketplace for all things geek – a cornucopia of comics, books and science-fiction, fantasy and popular culture memorabilia and collectables.

Those for whom money is no object can secure pretty much anything they can imagine, while others can simply ogle in awe and imagine how fantastic that 1/15 scale Bobba Fett would look perched on the bookcase in the home office that they have restyled as the cockpit of the Millennium Falcon. Now, don’t think for a minute that I am mocking such people because, believe me, if I had been in possession of sufficient funds, Fett would now be standing proudly beside me as I write this – alongside Yoda and other members of the extended Star Wars family. For those, like me, who are fiscally challenged, just taking in the vast array of items can be enjoyable enough and there is usually something to accommodate even the smallest of budgets, such as the $2.50 badge I took home that celebrates the greatness that is The Princess Bride.

However, other parts of the expo really are limited to those who have access to a seemingly endless supply of cash. Yes, there is an array of stars from some of the most popular movies and television shows, but for a very large number of people, access to these people is a pipedream unless they are able to fork out as much as $40.00 for an autograph and even more for a photo of their idol. For me and many like me, our interaction with these stars was nothing more than a fleeting glance from afar before being shuffled along to make way for those clutching the ‘autograph token’ that grants them their fleeting interaction with their hero. Amongst the stars being pimped to the masses this year were Game of Thrones cast members Mark Addy (King Robert Baratheon), Lena Headey (Cersei Lannister ) and Jerome Flynn (Bronn), along with Dominic Monaghan (Lord of the Rings) and Australia’s own Todd Lasance (Spartacus).

The late withdrawal of Summer Glau was a huge disappointment for many and it is something the Supanova organisers need to address, particularly following the no-show by the hugely popular Peter Dinklage, who appeared prominently on early event advertising. Surely, there must be some obligation on the organisers to deliver what they promise. In a conversation with a fellow attendee on the train at the end of the day, they revealed that they had purchased tickets and arranged travel from north Queensland, along with accommodation, only to ultimately discover that the people they most wanted to see were no longer going to be in attendance.

On a much more positive note, the undisputed hero of the weekend was Game of Thrones author George R. R. Martin. Offering his time – and signature – to the masses without charge, Martin was swamped by autograph seekers throughout the day and he took it all in his stride. The number of people who queued for their opportunity for the briefest of moments with Martin was staggering and he certainly made every effort to accommodate them all. Other highlights included the huge array of cosplayers resplendent in some incredibly elaborate, detailed and highly accurate costumes and characterisations, many of which must have been almost unbearable in the sweltering heat of the day. The passion and commitment of these obsessive fans never fails to impress. 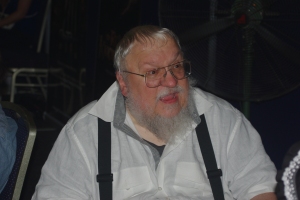 Once the extended wait to secure a ticket and get inside had been endured, Supanova proved to be a thoroughly enjoyable day out. The sheer volume and variety of items and events available for the diehard fans that flock to the expo is staggering, even if some come at a considerable price. As long as people continue to swarm in such numbers, it is unlikely that the event organisers will make too many changes to how the event is promoted and run. However, if they are to persist with staging the Brisbane event at this time of year, I can’t help but think that an alternative location – eliminating the need for punters to battle excessive heat (or rain as the case may be) as they move between the various venues – could be worth considering.