Ridley Scott is a filmmaker whose career has spanned some unadulterated cinema classics (Alien, Bladerunner, Thelma and Louise), some films of unmitigated awfulness (GI Jane, Kingdom of Heaven, A Good Year) and plenty that have fallen somewhere in between (Gladiator, Black Hawk Down, Body of Lies, Prometheus). With his latest effort, The Counselor, Scott plunges to new depths with a cinematic misfire of considerable heft. Despite possessing enough quality ingredients to produce what should have been a highly palatable viewing experience, The Counselor is ultimately as satisfying as a dodgy kebab after a big night out.

With an original screenplay by none other than literary legend Cormac McCarthy and a stellar cast that includes Michael Fassbender, Javier Bardam, Brad Pitt, Penelope Cruz and Cameron Diaz, it is difficult to know exactly what went wrong. First and foremost, one can’t help but feel that McCarthy – who wrote the acclaimed novels from which the likes of No Country for Old Men and The Road were adapted into fabulous films – may have been better served to have penned The Counselor as a novel or short story and allowed somebody more experienced at the scriptwriting caper to mould the story into a screenplay. At times, the dialogue is unwieldy and unintentionally funny and there are many moments when it seems that McCarthy is being provocative just for the sake of it. A poolside conversation between Diaz’s Malkina and Cruz’s Laura is one example that readily springs to mind, while Diaz having sex with a car is another. Although riddled with conversations about, and allusions to sex, the film is decidedly unsexy despite being littered with beautiful people.

The film opens with a somewhat comical love scene involving Cruz and Fassbender as the titular lawyer whose name is never revealed. From here, The Counselor is very much a convoluted crime caper in which nobody seems to really know what is going on, despite the high stakes for the various parties involved. Bardam is flamboyant nightclub owner and criminal type Reiner, whose relationship with girlfriend Malkina seems borne from fear more than anything else. Reiner and the Counselor become involved in a plan to smuggle a shipment of drugs into America from Mexico, the transportation of which is one of the more ingenious aspects of the film as the contraband is stashed in drums which are then situated inside a septic tanker filled with sewerage. Pitt appears as a cocky intermediary whose involvement is supposed to ensure smooth sailing but, this is the movies after all, so nothing goes according to plan. The consequences are severe and several key players make the ultimate sacrifice for daring to dabble in the criminal underworld.

There is no doubt that our out-of-his-depth Counselor is very much in love with Laura and this relationship presents as the only genuine connection in the film, despite the clunky opening. In fact, the links between the various other characters and their exact role in the narrative is very difficult to fathom at times. The sophistication and efficiency of the double cross – which literally results in a trail of bodies littering the highway – is impressive and offers considerable insight into how good the film could have been if as much effort had gone into developing the characters and their relationships. The performances are fine for the most part given what they have to work with, although Diaz overplays her hand somewhat, channelling Ellen Barkin in a performance that ultimately renders Malkina as more a caricature than a genuinely menacing femme fatale. 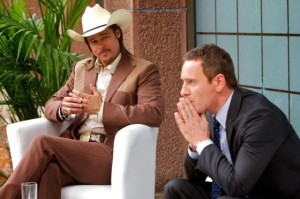 With small supporting roles from the likes of John Leguizamo, Goran Visnjic, Rosie Perez and Bruno Ganz (who was so amazing in Downfall), is seems incredulous that a film blessed with so much talent can be such a disappointment. Maybe this story needed to be told over a longer format that would allow sufficient exploration of the various players, their history, their motivations and their relationships. As it stands, not only is it hard to know what is going on, it really is hard to care.