The 2High Festival at the Brisbane Powerhouse on Saturday (November 2), brought artists from a range of disciplines together for a great day of entertainment, with theatre productions, musical performances, visual art and video installations throughout the day. 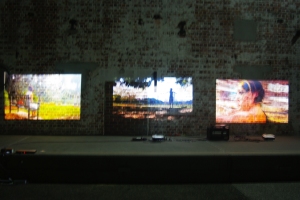 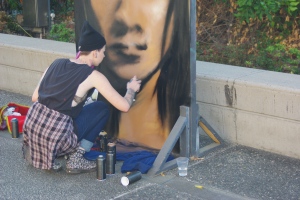 With free admission to all events, the Powerhouse was a hive of activity as punters of all ages took the opportunity to see performances from an array of talented artists and performers.

With so many events on offer, planning proved critical and it simply wasn’t possible to see everything. However, I was able to catch Play Dead, May I Please? and Bait in the Visy Theatre. 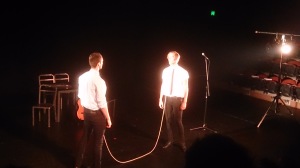 Created and performed by Thomas Hutchins and Michael Whittred, Play Dead (above) comprises structured confessions, music and movement to explore brotherly love and death. The performance was excellent and remained thoroughly engaging and entertaining despite the somewhat sombre subject matter.

In May I Please?, we share Mariana’s thoughts as they are revealed through dance and movement as she follows a path of desire, confusion and inner turmoil.

Bait is the debut work of emerging physical theatre group, Bates Theatre Ensemble, a company comprising three high school students;Peyton Leahy-Armstrong, Mollie McGregor and Sophia McGregor. Combining physical theatre, dance and comedy, Bait explores power and status. These girls may have looked as though they were making it up as they went along, but this obviously wasn’t the case and their infectious enthusiasm proved a winner.

Musical performances were shared across two stages and featured a range of musical styles. My first port of call was the Turbine Platform for the good vibe reggae of Fat Picnic , followed by the eclectic hip-hop of The Astro Travellers.

Of all the bands Little Odessa were the most energetic and produced a cracking set before good time Latin American rhythms of Izalco changed things up and had the crowd in a salsa frenzy (if there can be such a thing).

Self-proclaimed ‘video game band’ 7 Bit Hero were energetic and interactive, with audience members using smart phones to compete in video games projected onto the big screen behind the band. The sound and technology were seamless and the crowd embraced the concept with enthusiasm.

Next up, the electronic soul of MKO – aka Brisbane based singer/songwriter/multi-instrumentalist Hannah Macklin – was somewhat tame in comparison, perhaps a victim of scheduling more than anything else.

Rounding out the Turbine Platform program was Jakarta Criers a band making a name for themselves across Australia and internationally who, as expected, presented a polished set of indie rock to the small, but appreciative, crowd that stuck it out until the end of what had been a long day. 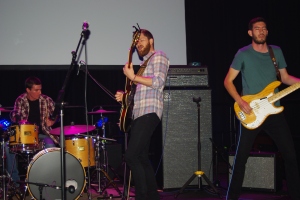 Amongst those tucked away on the Outside Stage throughout the afternoon was the delightfully delightful Hannah Rosa, whose charm , beauty and great voice combined to great effect for a show that suggests much bigger things are to come.

Also on the outside stage, I was able to catch the quirky Neighbour, the solo incarnation of Ryan Nebauer, who is perhaps better known as a member of Fushia.

Finishing up the Outside Stage on a beautiful, balmy Saturday evening was O’ Little Sister, the moniker of Redcliffe singer/songwriter Lucinda Johnson, who provided a perfect chilled-out end to this part of the day.

To check out music from all the various bands and singers, click on the links below:

For photos from the event, visit the Gallery. 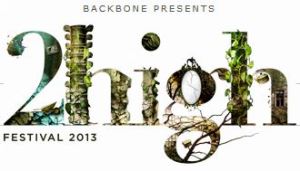