As amusing as this diagram is, the sad reality is that it demonstrates so emphatically everything that is wrong with Hollywood action movie formula. As this quite rightly points out, Hollywood action films are very much a product of the white, male hegemony that pervades the movie industry, relying on stereotypes and clichés to produce movie after movie that are carbon copies of each other. The misogyny of Hollywood is at its most obvious in action films, with these films also seemingly giving filmmakers carte blanche to engage in ethnic and cultural stereotypes. Perhaps the most telling, and alarming, information to be gleamed from studying this is by exploring what is missing from this model. 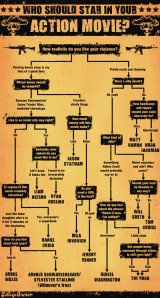 It is very interesting, and perhaps an indictment of both those who make and watch these types of films, that there is no emphasis at all on narrative. I mean, apparently, the story is of absolutely no importance whatsoever and that is certainly how it appears when you watch these films. Furthermore, there is no emphasis on the acting ability of those who take on action hero roles; it’s just about privileging physique and appearance over acting talent. Apparently, even a wrinkled 65-year-old former bodybuilder is deemed more ‘suitable’ for such roles than any woman! I mean, you only need to look at the proliferation of WWE performers securing lead roles in action films as proof positive that acting ability is of no concern to those who churn out such mindless drivel. These films are, for the most part, just random acts of violence being inflicted by (mostly) middle-aged white guys, with women confined to the role of damsel in distress.

Furthermore, it seems there is also no emphasis on the importance of the Director or any other key personnel or creative talent. We know these films are predictable and formulaic, but who knew they directed themselves? It is all about how much violence can be inflicted, who is going to do it and how they are going to do it. There is no suggestion that the skills/talent of the actors is important, there is no suggestion that the Director is important and there is certainly no expectation that these films should have characters we should care about or a story that is even remotely logical. Profit is privileged over everything else and it seems that any change to this formula is not on the agenda. The idea that making money is somehow incompatible with making quality films is a very strange notion indeed, yet this seems to be the abiding precept that ensures the predictability of so many Hollywood actions films.

Whilst this chart was obviously constructed somewhat tongue-in-cheek, the humour we derive from studying it is drawn in large part from how much it rings true. It is the ridiculousness of the reality that makes us laugh, even though we know that ultimately it is quite sad that this genre can be dissected so simplistically. It certainly explains why we have those déjà vu moments whenever we watch the latest Hollywood action ‘blockbuster’. We sense we have seen it all before, because we have!