Canadian multi-hyphenate Sarah Polley is a refreshing change in the film industry in that she seems very much determined to carve a career for herself that is devoid of the trappings and pitfalls that seem to encumber so many of her contemporaries, all the while developing a body of work as an actress, director, writer and producer that is as eclectic as it is good. First coming to notice as an on-screen talent in the early ‘90’s with her performances in The Sweet Hereafter, Existenz and Go, Polley followed up with strong turns in the likes of The Claim, My Life Without Me and Dawn of the Dead. Whilst she has continued to act in film and on television, it has been her work behind the camera in more recent times that has garnered positive attention. Having written and directed two critically acclaimed dramas in Away from Her (2006) and Take this Waltz (2011), the 34-year Polley has moved into the documentary realm with her latest effort, Stories We Tell, a fascinating, engaging and altogether impressive film that explores truth, memory and the various ‘versions’ of any given event or series of events.

The film sets itself up as a chronicle of Polley’s investigation into a long held suspicion that the man who raised her is not her biological father. In doing so, she interviews family members and friends of her actress mother, who passed away when Polley was just 11 years old, and makes a series of startling discoveries along the way. It was only whilst sitting in the cinema with the credits rolling that it became obvious to me that Polley is challenging the notion of documentary filmmaking as a representation of ‘truth’ through the way in which she has constructed, and re-constructed, her family history. This is a fascinating film in more ways than one. Polley has melded the interactive and reflective documentary styles to create a film that confounds the typical conventions of both forms to create something altogether unique. There is no doubt that Polley has set out to confuse and confound those not giving the film their utmost attention as what we see, or think we see, is often far removed from what is actually going on. The seamless interchange between the real and the constructed is executed with considerable skill and makes it almost impossible to know how much we should believe.

These re-creations serve the central theme of the film, which is the notion that the stories we hear are as much a product of the storyteller as anything else. Furthermore, the film begs us to question how much “truth” we’re actually hearing when stories are told. Stories We Tell takes the adage “there are two sides to every story” and blows it apart to offer as many as ten different versions of events, showing how stories can take a life of their own. The fact that there is ultimately so much narrative ambiguity might prove discomforting for some, but it is a fascinating, intimate and deeply personal story nevertheless. At first, it seems as though the film is very much a personal project in which Polley is simply setting out to learn more about her larger-than-life mother. As such, through interviews with her father, her siblings and various other bit players, we become privy to family secrets and recollections of events from the past. However, it seems as though it is the numerous inconsistencies in the various retellings of these events that has prompted Polley to expand the story beyond her family narrative – which is fascinating in itself – to a broader study into representations of truth and memory in storytelling. 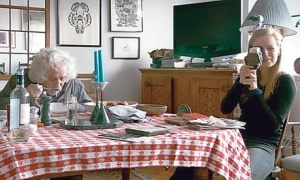 Ostensibly, Stories We Tell is about how the narratives of our lives shape and define us, both as individuals and as a member of a family group. The ambiguities in her telling of this story might confound or infuriate some, but Polley has again demonstrated considerable skill as a filmmaker in constructing a powerful, profound and poignant documentary that explores the elusive nature of truth and memory.