Given the quality cast and interesting subject matter, Thanks for Sharing should be a much better film. This comedy/drama is an interesting beast in that it promises so much, but ultimately fails to deliver. It is almost as though first-time director Stuart Blumberg has been afraid to push the envelope at all in his exploration of sex addiction, ultimately presenting a film that, despite some strong elements, comprises a somewhat limp narrative (no pun intended) that relies too heavily on contrivances and sentimentality rather than engaging characters. Blumberg, who also co-wrote the screenplay with Matt Winston (the son of special effects guru Stan Winston who has featured extensively as an actor on television), has placed so much focus on the various peccadillos afflicting the protagonists – which also include drug addiction and eating disorders – that we never really gain access to the characters in a much broader context, which makes it difficult to care too much about what happens to them.

Blumberg has assembled a great cast and they all do a perfectly amenable job in roles that lack the depth and pathos you would ordinarily expect in a film exploring such themes. Mark Ruffalo (The Avengers, Margaret) plays Adam, a 30-something environmental consultant and recovering sex addict who is five years ‘sober’ when he meets and falls for the forthright and (seemingly) supremely confident Phoebe (Gwyneth Paltrow). At the urging of his sponsor and best friend Mike (Tim Robbins), Adam pursues a relationship with Phoebe, who struggles to come to terms with Adam’s illness while revealing some predilections of her own which may offer some insight into her behaviour but are, unfortunately, never explored in any depth. Whilst convincing as the charming, in-control Adam who inhabits the first two-thirds of the film, Ruffalo is less believable when Adam’s old habits re-emerge and threaten to derail his measured, but highly functional, existence. 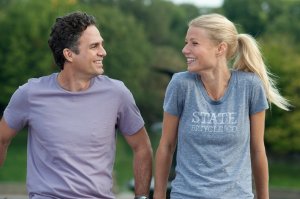 Perhaps outshining the main plot is the subplot involving two other sex addicts, played by Josh Gad and Alecia Moore, who is otherwise known as pop star Pink. Gad is Neil, an ER doctor who initially presents as a slovenly, repulsive, overweight, dishonest and somewhat pathetic member of the support group of which both Adam and Mike are members. However, when he is fired from his job, Neil begins to address his illness in earnest and develops a strong plutonic bond with Dede (Moore), a hairdresser whose self-esteem issues fuel her own destructive behaviours. Gad does very well to transform such a loathsome character into the hero of the piece, providing most of the comedic moments along the way, while Moore also impresses as the friend Neil so desperately needs.

Straddling the two primary narrative streams is the strained relationship between Mike and his son Danny (Patrick Fuget). Despite his own failings and the impact they have had on those around him, particularly wife Katie (Joely Richardson), Mike cannot bring himself to forgive Danny’s past sins – which include substance abuse and crime – and refuses to accept his son’s claims of sobriety. The two spend most of the film arguing or digging a hole in the backyard until, somewhat predictably, Danny’s relapse brings father and son together again amid a somewhat clichéd hospital room hugfest.

Despite the numerous crises being experienced by the various characters, everything is all wrapped up a bit too neatly. As a result, I was ultimately left to ponder what the point of it all was. Whilst it does generate some genuine laughs, Thanks for Sharing fails to really offer anything new about the nature of addiction. In fact, if anything, the film seems to suggest that society – the media, advertising, fashion – is to blame for the obsessive and destructive sexual behaviours of the various characters. Whilst the film is somewhat successful in combining comedy with a potentially depressing subject matter, the issue of sex addiction has been explored previously to far better effect in films such as Choke (2008) and Shame (2011). No doubt well intentioned and possessing all the ingredients for success, Thanks for Sharing ultimately presents as an undercooked and somewhat bland serving of independent cinema.