In a nutshell, Lovelace is about the consequences that ensue when a young woman who, in an effort to get away from her asshole parents, finds herself an asshole husband. That may seem like a somewhat trite summary of events and, believe me, there is certainly a large contingent of additional assholes who play a role in this story, but ultimately the film is about the relationship between scumbag extraordinaire Chuck Traynor and his wife Linda, who would find herself with the somewhat dubious honour of featuring in the most successful adult film of all time. Upon release in 1972, Deep Throat became a cultural phenomenon and ultimately went on to make more than $100 million in revenues. The fact that Linda Lovelace, as she was now known, received a paltry $1250 for her performance pails into insignificance in comparison to the other indignities she was forced to endure, assuming that what we are presented with here is an accurate rendering of events. 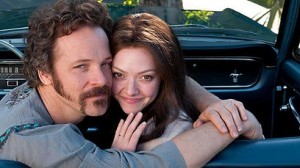 An almost unrecognisable Amanda Seyfried (Jennifer’s Body, Les Miserables) plays Linda who, having fallen pregnant as a teenager, at 21 still finds herself under the strict control of her overbearing parents. When she meets the decidedly sleazy Traynor (Peter Sarsgaard), Linda is immune to his obvious smarms and the two are soon married. Of course, it isn’t long before Linda finds herself subjected to Traynor’s abuse and when his arrest leaves them in financial strife, he hatches a plan to pitch Linda into the adult film industry. Linda’s attempts to escape Chuck come to nothing when her mother refuses to help, leaving her at the mercy of a collective of cretins – which includes producers Anthony (Chris Noth) and Butchie (Bobby Cannavale), director Gerry (Hank Azaria) and co-star Harry Reems (Adam Brody) – all of whom see Linda’s unique ‘talent’ as a road to riches.

In a unique approach, the film tells the story twice. The first version of events is a somewhat romanticised tale of Linda being ‘liberated’ by Chuck and turned into a celebrity, with all the trappings that entails. However, the second half of the film relays the story from Linda’s perspective as she submits to a polygraph to convince the publishers of her autobiography that her version of events is the truth. This time, we see how she was seduced, abused, coerced, humiliated and exploited by Traynor and those around him. I think this is an effective approach and it is ridiculous that some critics have decried Lovelace for glamourising the porn industry because the film goes to considerable lengths to do the opposite. To their great credit, directors Rob Epstein and Jeffrey Friedman have crafted a film that, despite its subject matter, is far from salacious in its depictions of sex and nudity. They have successfully presented a treatise on the improbity of the pornography business while presenting an engaging story that avoids the type of exploitation the film is rallying against. 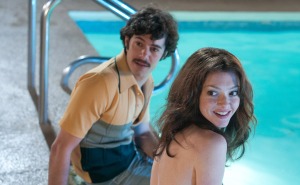 The film looks great with plenty of attention to the décor, fashion and hairstyles of the 1970s, all accompanied by a funky soundtrack. It is hard to reconcile that, for a brief period, hardcore pornography became fashionable among the American middle class and that a film such as Deep Throat – with its preposterous story of a young woman dedicated to fellatio after discovering that her clitoris is in her throat – became such an iconic symbol of this period in history. Linda Lovelace remarried and, on the back of the success of her autobiography, became an anti-porn campaigner who, it seems, ultimately found happiness as a wife and mother.