In this somewhat cynical period of Hollywood film production, any film that achieves reasonable box office returns is likely to see a sequel emerge as the studios look for the easiest way to make the biggest buck, privileging commerce over credibility or artistic integrity. However, whilst the reason for their existence might purely be the pursuit of profit, it doesn’t necessarily mean that these follow-ups can’t stand up as effective entertainments. Problems emerge though when the success of the first film is very much driven by the originality of a story, the characters and the relationships between them and the scenarios in which they find themselves. In 2010, Red proved a surprise box office success, driven largely by a witty and original premise that was well executed by a quality cast. The film featured Bruce Willis, John Malkovich, Helen Mirren and Morgan Freeman as a group of retired government assassins who join forces to take on the CIA after they are targeted for knowing too much. Adapted from a DC graphic novel by Warren Ellis, Red challenged many of the typical conventions of the action genre and was delivered with tongue planted firmly in cheek. 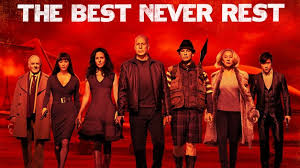 Given the success of Red, it was a safe bet that a sequel would be forthcoming and the somewhat unimaginatively titled Red 2 has subsequently arrived with most of the main players from the original intact. Willis, Mirren, Malkovich and Mary-Louise Parker have returned, with Anthony Hopkins and Catherine Zeta-Jones joining the ensemble. The sequel story again sees a reluctant Frank (Willis) and the somewhat unstable Marvin (Malkovich) needing to stay one step ahead of those trying to eradicate them, all the while trying to track the location of a nuclear device planted underneath the Kremiln. With Frank’s girlfriend Sarah (Parker) along for the ride, they find themselves in a range of outlandish scenarios from which they always somehow seem to emerge unscathed. Along with a slew of agents and operatives – almost all of whom meet their maker in one way or another – fellow hired killers Victoria (Mirren) and Han Cho Bai (Byung-hun Lee) are also in pursuit of our intrepid heroes. After breaking Edward Bailey – the man responsible for constructing the nuclear device – out of prison, the gang heads to Russia to save the world.

The action sequences are what we expect from this production of this ilk and bring nothing new to the table. In fact, the biggest problem lies with the fact that we have seen so much of this type of thing before. There are all the action staples: improbable fight sequences, wild car chases, explosions and outlandish shootouts, most of which take place in public locales where nobody seems to bat an eyelid at the destruction taking place around them. Thankfully, like its predecessor and unlike so many actions films, Red 2 doesn’t take itself seriously and therein lies the enjoyment. Whilst the appeal of the first film lay in its originality and there is nothing new or particularly fresh about what we are seeing this time around, there is plenty of humour in the banter between Hank and Marvin and this remains the real strength of the film.

This is not a bad film; it just lacks that element of surprise that made Red so enjoyable. Willis embodies Frank’s frustration with ease, while few people do bonkers better than Malkovich. As Sarah, Parker channels all of the sexiness that she brought to drug dealing housewife Nancy Botwin in television’s Weeds. Mirren is effortless in such a lightweight role by her standards and Lee brings some moments of mirth to his role. The weakest link in the chain is Zeta Jones as Russian operative Katja, a character who is completely unnecessary and really adds nothing of substance to the narrative. Furthermore, Zeta Jones’s performance is cringe worthy and quite distracting in its awfulness. I’m not really sure why Director Dean Parisot (Galaxy Quest, Fun With Dick and Jane) persisted with this character at all. Whilst not a classic by any stretch of the imagination, with cameos by David Thewlis and Brian Cox thrown into the mix, this is a perfectly pleasant way to spend a couple of hours.