Despite having Australia’s always reliable Academy Award-winning Geoffrey Rush in the lead role, The Best Offer arrived in local cinemas without much fanfare, but will hopefully secure an audience because it is far better than much of the drudge that fills our screens these days. Directed by acclaimed Italian filmmaker Giuseppe Tornatore (Cinema Paradiso, Malena) and featuring an international cast that also includes Jim Sturgess (Across the Universe, One Day), Hollywood veteran Donald Sutherland (Ordinary People, Hunger Games) and Dutch actress Sylvia Hoeks, The Best Offer is an intriguing and amusing drama that is hard to categorise without giving too much away.

Rush plays Virgil Oldman, a highly regarded art appraiser and auctioneer whose less than honest approach to his work is seemingly at odds with a personality that otherwise presents as highly competent and professional, if somewhat self-righteous. When Virgil is approached by Claire (Hoeks) to oversee the valuation and auction of a vast estate she has inherited, he begrudgingly wilts to her persistence but soon finds himself increasingly frustrated when she refuses to meet with him in person; all communications between the pair are via telephone. When Virgil discovers that Claire – who has confined herself to a hidden apartment in her deceased parent’s rundown mansion – is afflicted with agoraphobia, he becomes fascinated and sets out to lure her from this self-imposed exile. 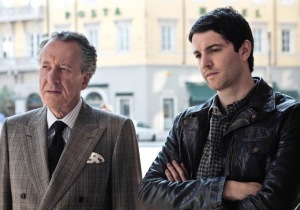 As to be expected, Claire’s initial hysteria at the thought of leaving her apartment starts to wane as Virgil, slowly but surely, starts to win her confidence. A strong bond develops between these two odd-ball characters, neither of whom is particularly likeable, afflicted as they are by quirks and eccentricities galore. Having developed an emotional connection with Claire but frustrated at not being able to see her, Virgil hides in the house after a visit. Once he witnesses her in the flesh, his attraction grows and, oddly enough, it is this deception that ultimately results in them meeting face-to-face, which seems a little contrived at the time but becomes a critical moment as the story plays out. 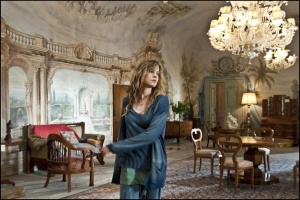 Ostensibly a misanthrope who spends most nights alone in his own secret room filled with priceless artworks, Virgil is extremely intolerant of most people he encounters, the only exception being Billy (Sutherland) and Robert (Sturgess). The former assists Virgil in manipulating the bidding at the auctions to secure items at far less than their real value, while Robert is a mechanical genius who constructs a priceless 18th-century automaton from pieces Virgil has pilfered from Claire’s house. It is a credit to Rush’s performance that we keep willing Virgil to succeed in his pursuit of Claire, despite his dishonesty and cantankerous demeanour. Claire eventually begins to trust Virgil and starts to venture further from home but, without divulging the secrets of the second half of the film which really make it much more interesting than it otherwise might have been, it goes without saying that this romance does not run smoothly.

With Rush leading the way, the acting across the board is great and even though a relationship between Clair and Virgil might seem unlikely given the disparities in their age, the personality traits they share means that they might just be perfect for each other. Sutherland and Sturgess instil a real likeability in their characters despite them being implicit in Virgils’ deceptions, while Hoeks is also strong in her first English-speaking role. Shot in several locations across Europe and with art masterpieces (or replicas perhaps) permeating so many scenes, the film looks fabulous. The world of these characters is one far removed from what most of us could possibly imagine, but this doesn’t detract in any way from the experience. With delicious unexpected twists as the story unfolds and some interesting minor characters, The Best Offer is a highly enjoyable film on most levels.