It is very rare that a sequel ever matches the quality of the film which precedes it and, when the original is a film that enjoys a cult following, the pressure and expectation on the follow-up is increased significantly. Such is the case with Kick Ass 2, the sequel to the hugely popular comic book adaptation Kick Ass. The originality and sheer audacity of Kick Ass saw it transcend the expected comic book geek boy audience to also prove popular amongst more mainstream cinemagoers, ultimately netting $50 million at the box office. Given such success, a sequel was perhaps inevitable and, as a huge fan of the first film, it was with much trepidation that I approached Kick Ass 2.

Unfortunately, despite obvious attempts to inject humour into the narrative, there is a real lack of fun that prevents Kick Ass 2 from soaring anywhere near the heights of its predecessor. It is almost as though Director Jeff Wadlow seems to think that pushing the violence and foul language to extremes will somehow make this a better film. Yes, the original was violent and caused plenty of controversy with its liberal use of words deemed inappropriate for utterance by a 12-year-old girl, but the humour and characterisations were the strength of the film. In Kick Ass 2 it seems as though Wadlow believes that making a better film simply means ramping up the violence and language without any thought for narrative or any of the elements that made the first film such a ride. Then again, given the sheer originality of the first film, perhaps a sequel was always destined to pail in comparison.

The opening moments of the film are particularly good with Hit Girl (Chloe Grace Moretz) – still mourning the loss of her father – taking the hapless Kick Ass (Aaron Taylor-Johnson) under her wing to teach him the skills of a real superhero. In fact, it is the conflicts our two protagonists (aka Mindy and Dave) face as they try to balance their commitments to school, family and their superhero alter-egos that provide some of the most interesting moments of the film. Unfortunately, this part of the narrative is simply not explored enough, seemingly sacrificed for the more ridiculous elements that push this film beyond superhero parody into something altogether less amusing. When the narrative veers away from these two, the film sags and becomes a bloated mess. 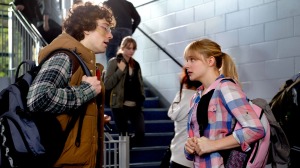 Particularly cringe worthy is Christopher Mintz-Plasse as Chris D’Amico who, having laid his Red Mist persona to rest, reimagines himself as self-proclaimed super villain The Motherfucker. Neither funny nor menacing, every time he is on screen you wince at the sheer awfulness of both the character and the performance. Determined to avenge the death of his father at the hands of Hit Girl and Kick Ass, he assembles an equally appalling gaggle of criminal types to form the Toxic Mega-Cunts. Of these, the only one who presents any kind of threat to anybody is Mother Russia (Olga Kurkulina), who kills several police officers single-handedly while her cohorts look on.

When Hit Girl is forced to curtail her crime fighting exploits and navigate the much more frightening world of high school, Kick Ass teams up with a disparate group of ragtag hero wannabes to form Justice Forever, led by an ebullient former gangster who calls himself Colonel Stars and Stripes (Jim Carrey). With Kick Ass firmly in the The Motherfucker’s sights and all members of Justice Forever therefore at risk, Hit Girl is forced out of retirement to join Justice Forever in taking on the The Motherfucker and his gang, the outcome of which is never really in doubt.

With Wadlow also writing the screenplay, there really is no one else to blame for this mess, although surely producer Matthew Vaughn – who did such a good job in directing the first instalment – could have had greater input to weed out some of the sillier ideas, such as a device that instantly makes people vomit and shit themselves. Moretz and Taylor-Johnson do the best they can in reprising their roles, with John Leguizamo (Moulin Rouge) and Donald Faison (TV’s Scrubs) also appearing, but perhaps wishing they hadn’t. Meanwhile, Carrey has publicly denounced the film citing the excessive violence, but perhaps he is just embarrassed about the whole thing.