Anybody familiar with South African filmmaker Neill Blomkamp’s debut feature District 9 will no doubt identify the similar themes and political allegories that permeate his sophomore effort Elysium. A parable of his apartheid-era homeland in which aliens are treated as second-class citizens, District 9 rightly attracted plenty of positive attention and marked the director as a talent to watch. With a Hollywood budget at his disposal for Elysium, Blomkamp has upped the ante somewhat in his continued examination of social injustice and the widening gap between rich and poor. In fact, much of what takes place in Elysium reflects what is happening right now on the Australian political landscape – and elsewhere in the world – with the privileged inhabitants of a prosperous society desperate to ‘protect’ themselves from those seeking assistance and/or asylum. 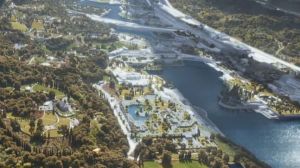 The year is 2154 and there are basically two classes of people: the extremely wealthy who live on the idyllic man-made orbiting habitat of Elysium, and the bulk of the human population who remain on a ravaged, overpopulated Earth. Defence Secretary Delacourt (Jodie Foster) will stop at nothing to enforce anti-immigration laws and preserve the luxurious lifestyle enjoyed by the citizens of Elysium. Akin to what we see on the news every day, such efforts will not stop those desperate for a better life, which prompts Delacourt to take drastic action. The hero of the piece is Max Da Costa (Matt Damon), a former criminal who is exposed to radiation in a workplace accident and, with only a few days to live, needs to reach Elysium to access the medical technology that will save his life. In an effort to secure passage to Elysium from people smuggler Spider (Wagner Moura), Max agrees to undertake a risky mission to retrieve information from industrialist John Carlyle (William Fichtner).

When Kruger (Sharlto Copley), a deranged, amoral mercenary, is engaged by Delacourt to deal with the asylum seekers and stop Max and his crew from extracting the information from Carlyle, the scene set for a showdown. Elysium is far from subtle, with some confronting and morally challenging sequences in the film. There is a significant human toll throughout it all, with bloodshed galore as the two sides battle with weapons that literally turn human flesh to pulp. The worlds created by Blomkemp are effective and the contrast between Earth and Elysium is probably a somewhat accurate reflection of the widening gap between the mega-rich and the rest of us. 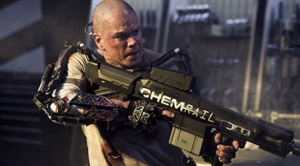 Some have described Damon’s performance as bland and subdued, but his character is not a typical hero and therefore isn’t meant to present as a wise cracking John McClane-type. His is an ex-con whose focus is getting to work each day and serving out the remainder of his parole period, which proves a challenge in itself as he battles the temptations of his former life and the constant scrutiny of the over-zealous robot security force. Max has no grand plan to save the world, he just wants to reach Elysium to save himself; that is until the opportunity to help childhood sweetheart Frey (Alice Braga) becomes a part of the equation. If anything, it is the bad guys who are the problem with Kruger, Carlyle and Delacourt all presented as somewhat one dimensional.

It is really interesting to see Hollywood producing what they hope will be a blockbuster that is a satire on the first world privilege in which the studio executives are quite firmly entrenched. In addition to its critique of the widening gap between rich and poor, the film also prophesies about the impact of ongoing environmental degradation and the racial divide. Elysium seems to be more predictive than pessimistic and proffers a sobering look at what the world might look like 150 years from now, particularly given that there are so many who must feel as though they have already been left behind. Perhaps not as effective overall as Blomkamp’s first film, Elysium still presents an entertaining and thought provoking glimpse into a future world.

One thought on “Elysium”