Mexican-born Director Guillermo del Toro grew up watching Japanese monster movies in his home country and his love of these films is very much evident in his latest cinematic offering, the special effects spectacular that is Pacific Rim. After making his Hollywood debut in 1997 with science-fiction creature feature Mimic, del Toro followed up with the orphanage-set horror The Devil’s Backbone (2001) and the less than inspired vampire sequel Blade 2 in 2002 before being handed the reins of the comic book adaptation Hellboy (2004) which, whilst not a blockbuster by any means, attracted a strong cult following. With his next project, del Toro changed tack to create what most people regard as his masterpiece, the Spanish language fantasy drama Pan’s Labyrinth (2006). Two years later came the Hellboy sequel and since that time, del Toro has been linked to a myriad projects as Director, including The Hobbit (for which he wrote the screenplay) and has served as a producer on films as diverse as Kung Fu Panda 2, Rise of the Guardians and Mama. However, it is the monster mash-fest of Pacific Rim that sees del Toro back behind the camera again for the first time in five years. 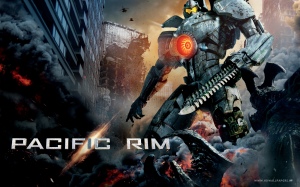 In Pacific Rim, the world is under attack from giant creatures known as Kaiju, who emerge from the bottom of the ocean to attack coastal cities. As a result, a special weapon has been devised in an effort to stop them in their tracks. Jaegers are enormous robots controlled by two pilots simultaneously who are connected via a ‘neural bridge’. With the Kaiju seemingly unstoppable, Jaeger program leader Stacker Pentecost (Idris Elba) turns to a former pilot and a rookie looking to avenge the death of her family to save the planet. There is actually more to this movie than the trailer would have us believe as it is not just an endless series of brutal battles between the Kaiju and the Jaegers, although they certainly do take up a large portion of the running time and are very well constructed.

The problem is that, whilst there is an effort to provide insight into the characters and their motivations and relationships, too many clichés and stereotypes abound, from the Golden Gate Bridge being destroyed (again) to the geeky, bickering scientists or the Russian pilots who look, and sound, just like somebody doing an impression of Dolph Lundgren. Furthermore, with the exception of Rinko Kinuchi as Mako, the acting is wooden and Charlie Hunnam fails to bring much gravitas to the lead role of Raleigh Beckett, a skilled pilot who is haunted by the death of his brother in a Jaeger mission years earlier. Kinuchi, whose performance in Babel (2006) for another Mexican filmmaker in Alejandro Gonzalez was so good, is really strong once again. Perhaps most impressive of all though is Mana Ashida as the young Mako in one of the most moving moments in the film. 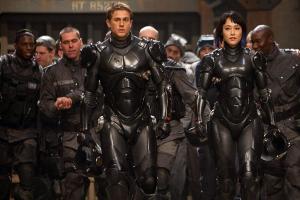 There are romantic overtones in the relationship between Raleigh and Mako and, whilst there are various attempts to inject humour into the chaos, particularly in the rivalry between Newton (Charlie Day) and Gottlieb (Burn Gorman), it is the appearance of Ron Perlman late in the piece that brings genuine mirth. Perlman, who starred for del Toro in the Hellboy films and features alongside Hunnam on TV’s Sons of Anarchy, is a delight as Hannibal Chau, leaving you wishing that he had played a bigger part.

Overall though, despite its flaws, Pacific Rim is entertaining enough and will no doubt prove to be del Toro’s biggest hit to date. The action sequences are effective without being excessive and the story moves along at a reasonable clip, with only a few stumbles to accommodate the to-be-expected macho posturing from the various alpha male characters that are such a staple in a movie of this ilk.