Like so many people around the world, I have been a little bit in love with Audrey Hepburn for a very long time. There is little doubt that Hepburn remains one of the most idolised figures ever to emerge from Hollywood, and with good reason. This beloved, stunningly beautiful actress/style icon/UN ambassador is synonymous with elegance and remains one of the most admired figures in history. Such is her continued popularity that books chronicling her life, her fashions and her career appear on bookshop shelves with monotonous regularity. Walk into any bookshop and Audrey Hepburn will be somewhere on the shelves, looking at you with the combination of glamour and girl-next-door innocence that she combined so very well. The most recent addition to this expansive collection of literary tributes is Audrey Hepburn in Hats, which is yet another ode to the sense of style and sophistication that Hepburn exuded in everything she did. It is hard to imagine any contemporary Hollywood celebrity ever attaining the level of reverence that Hepburn continues to enjoy. Whilst such a book might seem to be a somewhat cynical exercise to capitalise on her enduring popularity, to me it is just further evidence of the demand for her image and a reminder of all the great qualities she possessed in a life that captivated people around the world.

Audrey Hepburn exudes beauty, charm, grace, sophistication and sexiness all at once. With a beauty that runs much deeper than her flawless exterior, Audrey Hepburn is an example to us all. Few celebrities have been held in such universally high regard for so long and, given the somewhat vacuous nature of celebrities today, it seems unlikely that we will ever see the likes of her again. I became captivated by her the first time I watched Breakfast at Tiffany’s and my admiration has only grown stronger as the years have passed. Her iconic performance as Holly Golightly is utterly mesmerising. In fact, whenever she is on screen, Hepburn lights up the scene in a way that no actress since has been able to achieve. Her talent matched her beauty, as evidenced by her Academy Award in 1953 for Roman Holiday. 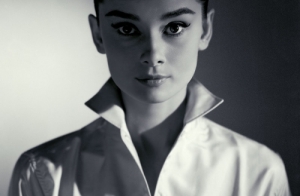 Of course, her influence on fashion has also been significant. The major difference between Audrey Hepburn and other actresses of the day was that she was very thin and also quite tall. Hepburn was a friend of fashion designer Hubert de Givenchy, who designed many of the pieces worn in her films, including the ‘little black dress’ from Breakfast at Tiffany’s that continues to inspire fashion to this day and is perhaps the most influential garment in fashion history.

Hepburn started working for the United Nations in 1988 and following her last screen performance in Steven Spielberg’s Always in 1989, she devoted herself entirely to her work as a Goodwill Ambassador until her death in 1993. Having almost starved to death as a child in Nazi-occupied Holland during World War 2, Hepburn was determined to help others at risk of succumbing to such a fate. Her work took her to Africa, Asia and Latin America and brought international attention to the plight of sick and starving children around the world.

I don’t need to fully explore the majesty that is Audrey Hepburn here because there are tributes galore to her already in print and across the internet. I just wanted to express my admiration for her and maybe enlighten those who are yet to fall under her spell, if such a person exists.

“I am, and forever will be, devastated by the gift of Audrey Hepburn before my camera. I cannot lift her to greater heights. She is already there”. Richard Avedon – photographer